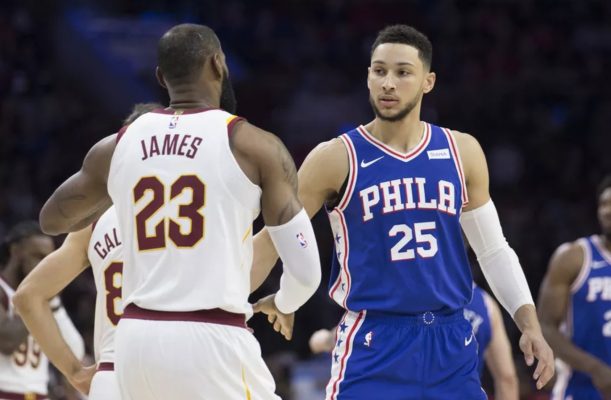 Exactly which team Cleveland Cavaliers forward LeBron James will be playing for next season remains uncertain, given his likely plunge into the free agent market. A few teams have been mentioned frequently, though it appears that one new franchise has entered the picture.

Jeff Zillgitt of USA Today indicated that some executives believe that the Philadelphia 76ers will be making a concerted effort to sign James next July in the event the 15-year veteran decides to opt out of the final year of his three-year contract:

“If James, who can become a free agent after this season, decides to leave the Cavaliers, he could – and should – consider the 76ers, and executives around the league believe Sixers president of basketball operations Bryan Colangelo will attempt to sign James.”

The 76ers wouldn’t have too much trouble carving out space within their salary cap to sign James. Plus, they could offer a team that’s been built over the past few years with a number of top draft picks like Joel Embiid, Ben Simmons, Markelle Fultz and Dario Saric.

The fact that James and Simmons share the same agent, Rich Paul, also feeds into such speculation. Adding to all of this is the praise that James offered Philadelphia head coach Brett Brown before Cleveland’s 113-91 victory on Monday night.

“The organization has done a great job believing in Brett Brown’s system, believing in what he wanted to do and they gave him time,” James said.

Previously, the free agent rumor mill has largely focused on James ending up with the Los Angeles Lakers. Their up-and-coming status coupled with the fact that he owns a $21 million home in the area are cited as the chief reasons that he’d make such a move.

Conceivably, a move to Los Angeles could also involve signing with the Lakers’ co-tenant at Staples Center, the Los Angeles Clippers. However, the Clippers could be on the verge of starting a rebuilding effort that would undoubtedly cause James to look elsewhere.

Zillgitt mentions the Houston Rockets and San Antonio Spurs as other possible options, though their salary cap situations would make it next to impossible to add James.

Despite the mention of James possibly leaving the Cavaliers, he’s given no outward sign that such a perception is accurate.

“Anytime I’m able to be a free agent or my contract is ending, I’ll approach that when the summer comes,” James said at the start of the team’s training camp in September.

In the Cavaliers’ first 21 games this season, James has put up MVP-caliber numbers in helping the team bounce back from a 5-7 start to win nine games in a row.