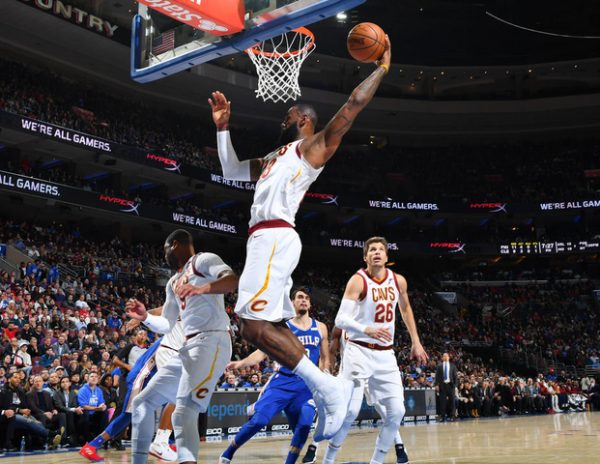 (Philadelphia, PA) — Combining a double-double from LeBron James and a 23-4 fourth-quarter run, the Cleveland Cavaliers defeated the Philadelphia 76ers by a score of 113-91 at Wells Fargo Center on Monday night. The victory boosts the Cavaliers’ winning streak to eight games.

James finished the night with 30 points and 13 rebounds and also contributed six assists. Meanwhile, the Cavs’ modest double-digit lead early in the final quarter became a comfortable cushion to give the Cavaliers a 13-7 record on the year. The run actually had its origins at the end of the third quarter, but the Cavs ended any talk of a comeback by turning an 86-77 lead into a 109-81 blowout.

One key throughout the contest was the solid bench play by Cleveland, which got 57 points from seven different players. Kevin Love and J.R. Smith were the only other starters to score in double figures, with 13 and 11 points, respectively. For the bench, Dwyane Wade finished with 15 points, Jeff Green managed a double-double with 14 points and 10 rebounds and Channing Frye tossed in 12 points.

“Our bench has been phenomenal, especially on this streak we’re on,” James said after the game. “When they made a run at the starters, our bench came in and pushed the lead back up.”

Delivering the opposite of his recent fourth-quarter heroics, James began the game by scoring the first nine points for the Cavs and 13 of the first 15, ending with 15 to give the Cavaliers a 29-22 advantage at the end of the period. Cleveland had held a 17-12 lead before Philadelphia went on a 10-2 run to take a 22-19 lead with 3:26 remaining. However, the Cavaliers answered by scoring the final 10 points of the quarter.

“He got us off to a good start, being aggressive, getting to the basket,” Cavs head coach Tyronn Lue said of James.

The Cavs led by as many as 13 during the second period, but had continual problems throughout the first half in the areas of defense in the paint and controlling the glass. The 76ers closed out the first two quarters with 36 of their 45 points being scored in the paint and got numerous second-chance opportunities, thanks to 12 offensive rebounds. James drilled a buzzer-beating three-point shot in front of the Cavalier bench to give them a 53-45 halftime lead.

“One thing that’s great about this team is that we’ve got starters on the bench,” Wade said.

The Cavs were able to boost that lead to 14 at 66-52 and seemed to be taking control of what became a physical battle until the 76ers answered with a 17-6 run. That sliced the margin to just three points at 72-69, though Cleveland was able to counter with a 13-4 run to close out the quarter and take an 85-73 lead entering the final quarter.

“We’ve been very resilient. Teams have made runs, but we’ve been able to answer,” James said.

The Cavaliers have little time to focus on this contest, with a home matchup against the Miami Heat set for Tuesday night. Tipoff for that game will be just after 7 p.m.

“We’re  just trying to get better each game,” Lue said. “Trying to figure out where we are as a team.”