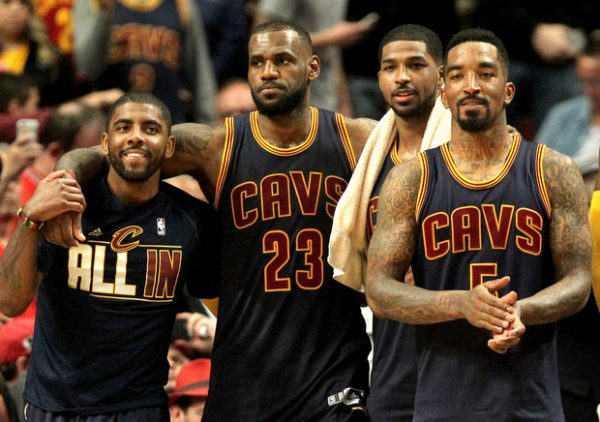 The relationship between Cleveland Cavaliers forward LeBron James and his former teammate Kyrie Irving has been the source of frequent speculation ever since James returned to play for the Cavaliers in 2014. It became even more closely watched after Irving asked for a trade from the Cavaliers in July, something that was granted the following month when he was dealt to the Boston Celtics.

On Monday night, both James and J.R. Smith gave a thumbs up to a social media post about Irving that contained a clip of the point guard from Monday night’s game between the Celtics and Atlanta Hawks. A few hours later, James followed that up with an Instagram post that was open to interpretation as far as what it meant.

Oh, also both LeBron and JR Smith liked this video of Kyrie dicing up the Hawks tonight ??? pic.twitter.com/Mog4zQY7GZ

In that game against Hawks, Irving scored 35 points to lead the Celtics to their ninth straight victory, with the Cavaliers currently on the other end of the spectrum by having dropped six of their last eight contests.

During the Cavaliers’ sluggish 4-6 start, James has remained consistent with his play, averaging 28.8 points, 9.1 assists and 7.2 rebounds. However, Smith has struggled, averaging just 5.3 points per game and hitting just 27.5 percent of his shots from the field. More alarming are Smith’s statistics from long-range, with the veteran connecting on just 23.4 percent of his three-point shots,

The Cavs will attempt to get back on winning track on Tuesday night, when they host the Milwaukee Bucks. They’ll then begin a four-game road trip in Houston on Thursday night.