Don't Miss
Home / Rumors / Report: Isaiah Thomas’ Hip Injury Caused by Condition That Can Only Be Corrected With Surgery

Report: Isaiah Thomas’ Hip Injury Caused by Condition That Can Only Be Corrected With Surgery 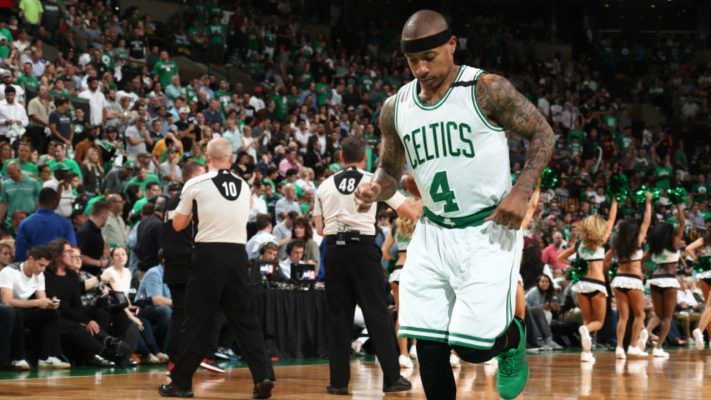 The furor and controversy that’s resulted from the hip condition of point guard Isaiah Thomas has put the trade between the Cleveland Cavaliers and Boston Celtics that’s also included Kyrie Irving in severe jeopardy. One theory indicates that surgery on that hip is the only option for Thomas.

Reddit user “BrazenCowpoke” pointed out an article from three months ago that was written by a Boston-based sports medicine doctor. In an effort to describe the condition in layman’s terms, the Reddit user indicated how Thomas came to injure his hip:

“This injury is actually caused by the person’s own bone structure,” the Reddit user wrote. “Basically, some people are born with an extra bump on the end of their femur, hip bone, or both, and with repetitive motions like jumping, these bumps can pinch the protective cartilage in the hip (the labrum.) This is what happened with IT (Thomas). His bones pinched his hip labrum to the point of tearing in the playoffs.”

The bad news for Thomas is that without surgery, the issue won’t go away.

“With the extra bone still there, it’s only a matter of time before the labrum will be pinched and torn again,” wrote the Reddit user. “The only way to correct this is to shave off the extra bone so that it no longer pinches the labrum, which can only be done with surgery that has a 6-9 month recovery time.”

Thomas appeared to be aware of that unique situation when he was examined. ESPN’s Chris Forsberg noted this at the time of the examination:

“Like I have an extra bone or something, like doctor talk,” Thomas said. “I don’t understand what they’re saying.”

In addition, Thomas distinctly noted the possibility of surgery:

“[Surgery is] not the No. 1 option right now, but it could be once the swelling goes down,” Thomas said Friday while addressing reporters at Boston’s exit interviews. “They want to let [the swelling] die down a little bit then take another MRI once everything is down and it’s back to normal. We’ll go from there. Hopefully I don’t have to have surgery, but I know that is an option.”