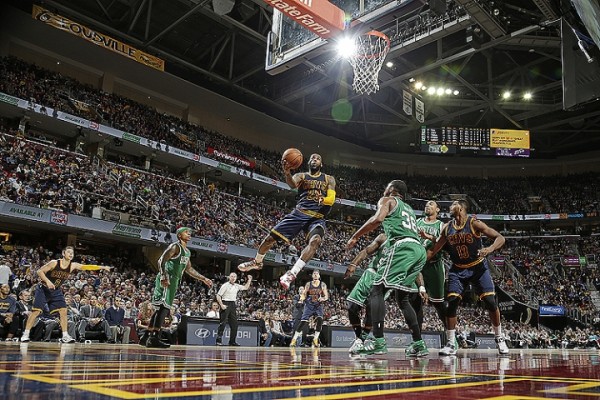 (Cleveland, OH) – Plagued by a sluggish effort throughout, the Cleveland Cavaliers saw their 18-game home winning streak come to an end as they dropped a 99-90 decision to the Boston Celtics at Quicken Loans Arena on Friday night.

After trailing by double digits for a good portion of the game, the Cavs charged back in the third quarter to briefly take one lead and tie the game twice. However, the Celtics were able to regain control of the game and maintain the lead for the rest of the contest.

The Cavalier backcourt was depleted by the absence of both Kyrie Irving, who sat out the game to rest a sore hip, and Iman Shumpert, who missed because of quad contusion suffered in Wednesday night’s victory over the Milwaukee Bucks.

Cavs’ head coach David Blatt said that Irving would have played had it been a playoff game, but that, “We just felt that the best court of action was to sit him.”

Not having either player in the lineup was costly though, since the Cleveland starting guards were outscored 34-9 on the night.

Despite the loss, Blatt was philosophical about the game, saying, “By and large, it was a good game for us. We got to give some guys some time on the court who hadn’t played much.”

Boston controlled play throughout the first two quarters, with the Cavaliers’ cold shooting helping the Celtics to jump out to a 16-4 advantage midway through the first quarter.

The closest the Cavs were able to get for the rest of the first stanza was seven points after James Jones converted a three-point play with 58.8 seconds left to make it 23-16. However, Boston went on a 5-1 run to close out the period for a 28-17 lead.

During that first quarter, Cleveland connected on just seven of their 21 field goal attempts, including one of 10 from beyond the three-point line. Their defense also allowed the Celtics to dish out 10 assists.

The icy shooting continued as the Cavaliers managed just two field goals in the first six minutes of quarter number two. For most of that time, the Cavs were down double-digits, falling behind by 16 in the closing seconds, though Matthew Dellavedova’s buzzer-beater chopped it to a 54-40 deficit at the break.

After play resumed, it was more of the same, with Boston holding a double-digit lead throughout. The Cavs’ night seemed to be symbolized by an attempted dunk by James that ricocheted backwards and out of bounds with Cleveland trailing 66-55.

However, after Cleveland then stopped the Celtics, they connected on 10 unanswered points on dunk by Tristan Thompson, a three-point play from James, a three-pointer from Mike Miller and two free throws from Kevin Love that made it 66-65 with 4:13 left in the third.

Another three from Miller one minute later tied the game at 68, marking the first time the game had been deadlocked since a very early 2-2 tie. Two free throws from the veteran then gave the Cavaliers a brief lead before Boston ran off five straight points.

Miller again tied the game with 39.5 seconds left in the quarter, but two Celtic free throws gave them the 79-77 lead as the horn sounded.

The surge by Miller resulted in a postgame question to LeBron James that asked if a performance like that gave confidence to Miller, who has seen little action this season.

“They (Miller and Jones) don’t need confidence. When their number is called, they’re ready to go.”

The closest the Cavs would get from there was following a Joe Harris three that made it 81-80 Boston with 10:55 left. However, over the next seven minutes, Boston went on a 13-4 run to effectively put the game away.

Blatt was asked if he was thinking about how the team’s first round playoff opponent might factor into his playing time decisions, and said, “We’re worried about ourselves. We have to keep these guys in shape and get them some rest at the same time.”

James echoed the latter comment by saying, “For us, it’s important for us to stay in rhythm and healthy, and we came out healthy tonight.”

The two teams meet again on Sunday afternoon in Boston, with the Celtics looking to even the season series after having dropped the first two contests. Tipoff will be just after 3 p.m.