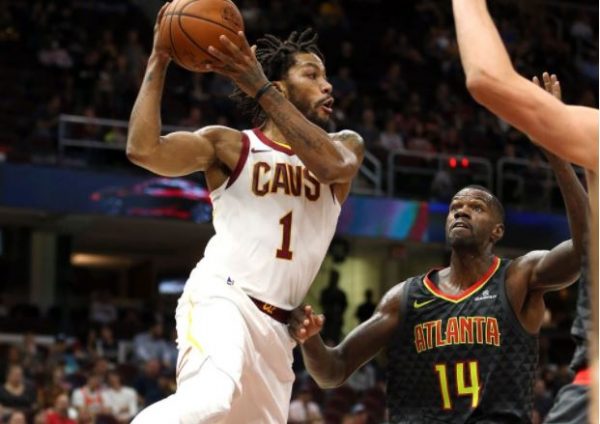 While the Atlanta Hawks defeated the Cleveland Cavaliers 109-93 in their first preseason game on Wednesday, newly acquired stars Dwyane Wade and Derrick Rose had nothing but praise for the team and each other.

“Man, man. It’s the best team I ever played on. It’s the most space I’ve ever seen on the floor ever since I came into the league,” Rose said. “Looking like I’m going to be playing without a lot of double teams or without a lot of people loading up to me. This will be my first time experience with that so I will be able to tell you how that goes or what I see, but we’ve only played one game. I just see there’s a lot of space.”

“It’s normally not like that,” Wade said. “On most teams you have two guys and if you’re good you have three guys. … Once we get used to that we’ll be an even better defensive team because right now we’re a little slow getting back in transition because you’re just not used to everybody being live.”

Wade also discussed his transition to the Cavs, saying Cleveland is already starting to feel like home.

“I’ve never been starting at forward, so I wasn’t even paying attention,” Wade said. “All in all, just the ovation from the Wine & Gold game, to yesterday the first preseason game, it was great. I’m still getting used to it. I’m sure the people in Cleveland, the basketball world is getting used to it, but it definitely, my teammates and everyone have definitely made me feel comfortable and at home here.”

Wade also admitted that while he’s been watching the former NBA MVP’s career since he was a talented kid from Chicago, he’s enjoying getting to know Rose on a more personal level.

“I’d say the best thing is getting to know him,” Wade said. “Everyone knows that he’s a little quiet from the outside but when it’s teammates, you get to see a different side of him. I love where he’s at right now. He’s attacking, he’s running the offense. You have to have a guy who can do that and his ability to score the basketball is always there.”

“We’re hoopers,” he said. “We’re going to get the job done one way or another. But one thing I love is that we love the game. He’s always on his iPad looking at film, looking at practice film and he’s always learning. He’s a student of the game I would say. I’m the same way.

“Even though I don’t look at the iPad before a game, I think I watch people enough, learn their tendencies so that I don’t have to go out there and have to be thinking.”

The Cavs’ offseason roster additions shined last night and Wade and Rose led the charge. With LeBron James still nursing a slight ankle injury, we can only imagine how dangerous this team will be once fully healthy.