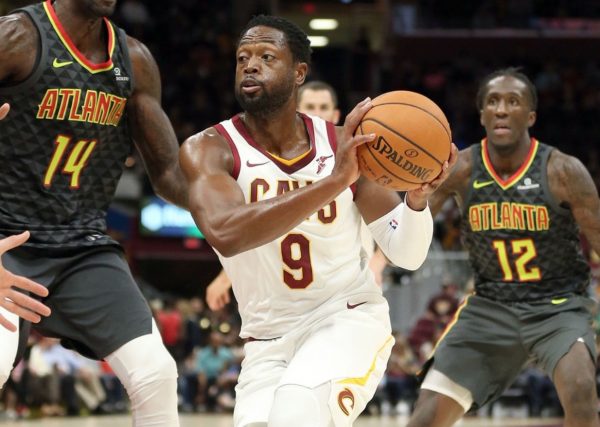 (Cleveland, OH) — A fast start by the Cleveland Cavaliers gave way to the typical signs of a first preseason contest as they were outscored 62-43 in the second half and dropped a 109-93 decision to the Atlanta Hawks at Quicken Loans Arena on Wednesday night.

Cleveland hit its first five shots from the field, but then cooled off considerably over the next few quarters, affording Atlanta the opportunity to take control of the contest.

Kay Felder led the Cavaliers coming off the bench with 13 points and a pair of steals, followed by Kevin Love with 12 points and five rebounds. Dwyane Wade also contributed four assists on the night

The Cavaliers hit the ground running by scoring nine of the first 11 points and pushing the lead into double digits, sparked by a pair of Love 3-pointers and a Wade steal. Midway through the opening period, the Cavs took their biggest lead of the first half at 21-7 off a 3-pointer from newcomer Jae Crowder. However, once the reserve units came in, the Hawks were able to chip away at that deficit and ended the quarter trailing by a 28-20 score.

“We came out with great energy,” Crowder said at halftime. “Offensively, we moved the ball well, we got every shot we wanted.”

That ball movement was evident from the 16 first-half assists the Cavs amassed on all but two of their 18 field goals during the first two quarters. In that second period, Cleveland had trouble putting the ball in the basket, hitting on just 33 percent of its shots from the field. In contrast, Atlanta connected on 63 percent of its shot attempts.

Once play resumed following intermission, Cavs head coach Tyronn Lue chose to focus exclusively on playing his reserves, limiting the starting unit to 15 minutes of action on the night.  In addition, shooting guard Iman Shumpert was held out after suffering what was described as a left foot injury.

During the third quarter, the Cavaliers’ shooting woes from the field continued, allowing the Hawks to take the lead for good. Cleveland ended the quarter trailing by six at 75-69. That would be as close as the Cavs would get for the remainder of the game as Atlanta took its own double-digit lead, boosting its advantage to as many as 20 points during the final period.

The most glaring absence from the game was Cavs forward LeBron James, who is continuing to rest an injured ankle that he suffered last week in practice. His status is currently day to day, though he’s expected to see some court action prior to the Oct. 17 regular season opener against the Boston Celtics.

“Went through shootaround today, but still day to day,”  Lue said about James before the game. “We don’t want to rush it, don’t want him to push it. But he said he feels a lot better.”

On Friday night, the Cavaliers will again take their home court, this time facing the Indiana Pacers in a game scheduled to tip off just after 7:30 p.m.