Video: With Kyrie Irving Watching His IG Live, Isaiah Thomas Says He ‘Will Average 25’ for Cavs 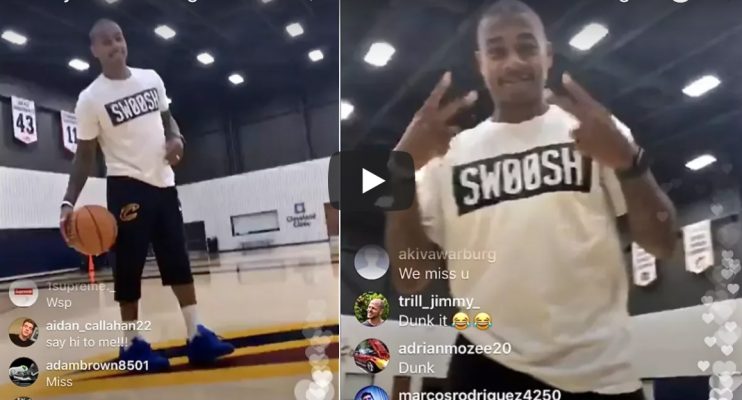 On Sunday, Isaiah Thomas and his two sons, Jaiden and James, took advantage of the Cleveland Cavaliers‘ practice facility and enjoyed a quiet day on the court. At one point, Thomas decided to turn on his Instagram Live and while love poured in from fans, his sons noticed that some fellow NBA stars were watching along.

“Kyrie’s (Irving) on this,” one of his sons said as Thomas dribbled in the background. “Kyrie’s right there. Kyrie’s watching!”

Thomas then approached and took the phone from his sons.

“Big C’s, look at that big C,” Thomas said as he showed the large Cavaliers logo in the middle of the court. “IG Live, what’s up with y’all? I will average at least 25 (points), I could do that in my sleep. I’m a professional scorer, I do that in my sleep.”

See the video below.

Thomas has been very open about his determination to come back from his lingering hip injury and return to All-Star form. He has also been honest about the fact that he took the Boston Celtics trading him for Irving very personally. Given that, it should come as no surprise that he sees Irving as a rival, and while he made the promise to the many fans watching his stream, he surely posed it as a challenge to Irving as well.

Hopefully Thomas is able to return from injury soon so he can put his money where his mouth is.