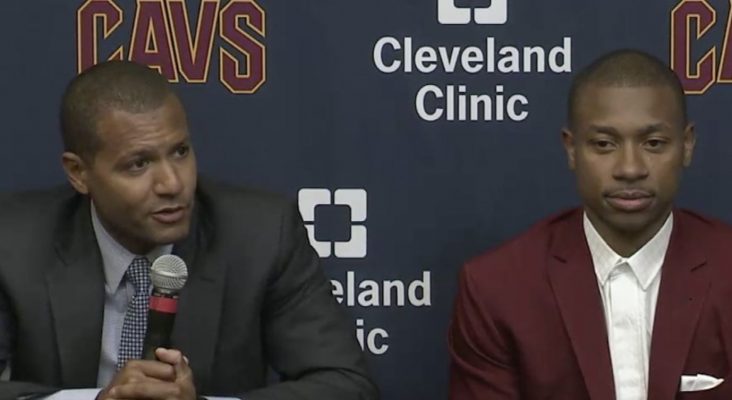 The Cleveland Cavaliers introduced Isaiah Thomas, Jae Crowder, and Ante Zizic during a press conference on Thursday. While much was discussed, perhaps the most important news to come out of the presser were the details regarding Thomas’ lingering hip injury.

During the presser, Cavs general manager Koby Altman said that Thomas’ road to recovery will be “non surgical.” Following Altman’s statement, Thomas spoke into his microphone to offer some commentary:

“Y’all hear that? Everybody wants to be doctors now,” he said according to Cleveland.com.

Altman added that as of now, the team has no timetable for Thomas’ return:

Altman continued to say that while Thomas’ injury has been a large topic of conversation since the blockbuster trade took place, the team does not plan to address any specifics of the injury at this time:

He added that the primary goal for the team is to let Thomas recover fully:

“The goal is to bring him back at some point this year and be healthy and compete and get back to IT status. That’s our goal and our responsibility to him.”

Thomas chimed in to state that his recovery is going well:

“I’m just getting treatment each and every single day, working out in the weight room,” Thomas said. “That’s the most that I’m doing right now. Like Koby said we have a plan and we’re just going to attack that plan and get me back to 100 percent as soon as possible.”

Perhaps this is not the best news Cavs fans could have hoped for, as it appears Thomas will likely miss a considerable chunk of the 2017-18 season. Still, it is good to hear that he will not require a surgical operation that would likely demand an even longer recovery time.