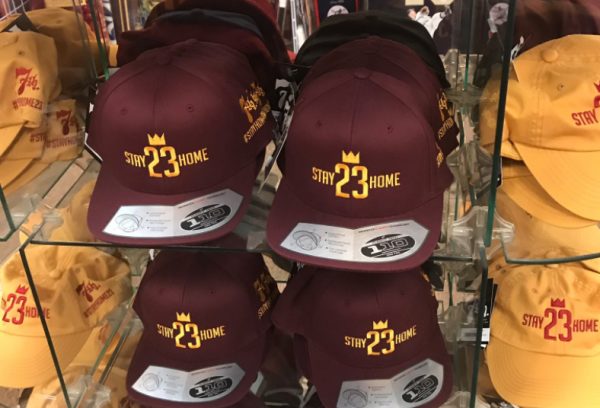 With Cleveland Cavaliers forward LeBron James possibly taking his talents away from Cleveland again next year, keeping him as a member of the Cavs beyond the 2017-18 campaign has resulted in a business opportunity for some local companies.

The T-shirts and hats available in James’ hometown of Akron have everything but the Cavaliers’ name mentioned or their logo featured, both of which would result in copyright violations. Yet they do have the team colors, James’ number and a desperate plea that all Cleveland fans are hoping that the superstar listens to next July. Thus, the message is being delivered loud and clear.

So this is already happening in Akron pic.twitter.com/f5ekd5bsI6

In reality, all of the marketing moves and begging that are likely to take place over the next 10-plus months are unlikely to sway the 14-year veteran. Instead, the key factors will ultimately boil down to how the Kyrie Irving situation is resolved, whether or not the team’s front office makes the necessary moves to improve the team during the season, and how well the Cavs are able to compete against elite teams, most notably the defending champion Golden State Warriors.

As those three components unfold, speculation will inevitably rise, which could be a boon for the above items. That means that each utterance by James will be carefully examined for any possible hint of his future plans.