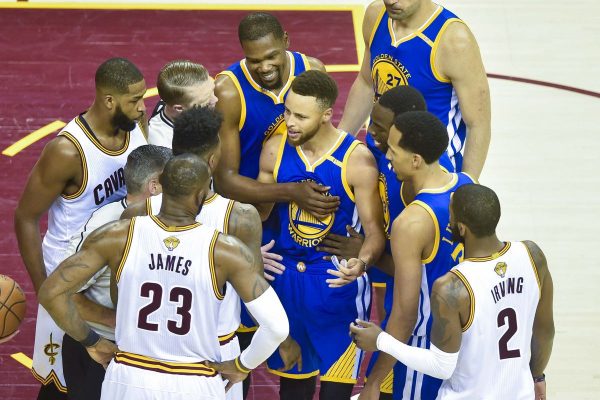 After getting a sneak peak at two prominent games on the Cleveland Cavaliers‘ 2017-18 schedule last week, the NBA released the full version on Monday evening. As expected, the 82-game schedule is filled with a number of national television appearances, including the Oct. 17 opener at home against the Boston Celtics and a Christmas Day matchup in Oakland against the defending champion Golden State Warriors.

At present, a total of 34 games will be shown nationally. Among this group are 11 games to be presented on TNT, 10 on ESPN, eight on NBA TV, and five more presented by ABC. In the latter case, the Jan. 20 game at home against the Oklahoma City Thunder and the Feb. 3 home matchup versus the Houston Rockets will be played at Quicken Loans Arena. Meanwhile, the Feb. 11 contest against the Boston Celtics and Feb. 25 road clash versus the San Antonio Spurs round out the five games among that group, which begin with the Golden State battle.

For the third year in a row, the Cavs will also face the Warriors on Martin Luther King, Jr. Day, Jan. 15. The matchup will take place in Cleveland, though the past two games on this holiday have both resulted in embarrassing losses for the Cavaliers.

With the status of point guard Kyrie Irving still in limbo, where he ends up will immediately ratchet up the interest in that team’s games against the Cavs. Presently, the two most prominently-mentioned teams that might acquire Irving have been the Phoenix Suns and Minnesota Timberwolves, a pair of Western Conference teams that will each face the Cavaliers twice.

If Irving heads to the Valley of the Sun, it will be a long wait before that first matchup, with the Cleveland not traveling to Phoenix until Mar. 13, before the two teams meet at Quicken Loans Arena 10 days later. Should Irving get his wish and head to Minnesota, the Cavs will meet him at Target Center on Jan. 8, with the return matchup set for Quicken Loans on Feb. 7.

The trip to Phoenix will be part of the Cavaliers’ longest road trip of the season, six games that include a return matchup on Mar. 11 against the Los Angeles Lakers. The latter game, along with the Dec. 14 matchup in Cleveland, will mark the first meetings between LeBron James and rookie Lonzo Ball. In addition, the rumor mill will be churning prior to these games, considering that the Lakers have been mentioned as a potential landing spot for James in free agency next July.

While that primarily West Coast swing is the Cavs’ longest road trip of the year, the roughest road stretch figures to commence on Dec. 17. That’s when the team begins a 27-day stretch that will see it play 12 games, 10 of them coming on the road.

One of the most controversial aspects of last season when it came to the Cavaliers was the concept of intentionally resting players for back-to-backs. That issue could surface again during the 2017-18 season, which shows that the Cavaliers will play 13 back-to-back contests, starting with three in the first two weeks of the campaign.

The Cavs’ regular season will officially conclude with a home-and-home series against the New York Knicks on Apr. 9 and 11, respectively.