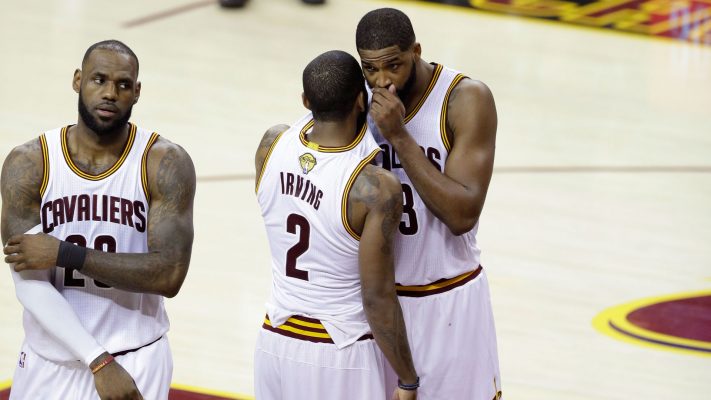 With each passing day, it becomes readily apparent that the relationship between the Cleveland Cavaliers and point guard Kyrie Irving had been eroding long before his trade request was made. Among the most recent bits of evidence of this comes from a report that Irving was aggravated at the fact that LeBron James was considered worthy of perks that nobody else on the team received.

The ESPN trio of Dave McMenamin, Ramona Shelburne and Brian Windhorst explored how Irving’s relationship with the team changed and how his overall role in relation to James was considered secondary. They noted how the issue could have been discovered last month, but team owner Dan Gilbert at the time was preoccupied with trying to re-sign former general manager David Griffin, an effort that ultimately failed.

Gilbert and Irving met on July 7, which was when Irving dropped his bombshell. Yet during the course of last year, red flags were apparent that Irving wasn’t happy with his role on the team.

“Much of Irving’s disenchantment with James was rooted in game play, sources said. James, as a once-in-a-lifetime talent, controlled the ball more than any other forward perhaps in league history,” McMenamin, Shelburne and Windhorst wrote. “Which means the ball was out of Irving’s hands more than he preferred. That said, Irving led the Cavs in shots in the 2016-17 season, averaging 1.5 more per game than James, and Irving averaged a career-high 25.9 points. It was the first time in James’ career he didn’t lead his team in shots per game.

“But there were ancillary issues that bothered Irving, too, such as how James’ good friend Randy Mims had a position on the Cavs’ staff and traveled on the team plane while none of Irving’s close friends were afforded the same opportunity. Irving chafed about how peers such as Damian Lillard and John Wall were the center of their franchises and catered to accordingly. There’s irony there, as Wall was envious of Irving’s Nike shoe deal and Lillard has never advanced beyond the second round of the playoffs. Irving has been to three Finals and has a championship.”

After an embarrassing loss to the San Antonio Spurs in March, Irving made an effort to connect with James. He reflected on his role as a team leader a few days later:

“You can’t rely on just thinking that one championship is enough. It’s natural for human beings to just get comfortable,” Irving said. “But if you a m—–f—–, you want two [championships], you want three, you want four, like you say you do. And I want more. I’m going to go take it. My job as one of the leaders on the team is to bring my guys with me.”

Over the past month, a number of different trade proposals were made by both the Cavs and other teams, some involving Irving. Yet none of them were completed, with Irving’s trade request following soon after that period of time.

Irving’s teammates, including James, were stunned by the news. The hope is that the situation can be worked out without negatively affecting the team.

“Sure, we’ve had our fair share of moments and kind of chaotic times, and that’s obviously been well documented, but at the same time we’ve had a lot of joy,” one Cavs player said. “I hope Kyrie is with us, that’s all I got to say. At the end of the day, we’re pretty f—ing good.”

The Cavaliers’ training camp is set to open in two months, though there’s no indication if and when a trade of Irving will take place before that happens. Having Irving still on the team could be a volatile chemistry experiment that might end up blowing up in the Cavs’ faces.