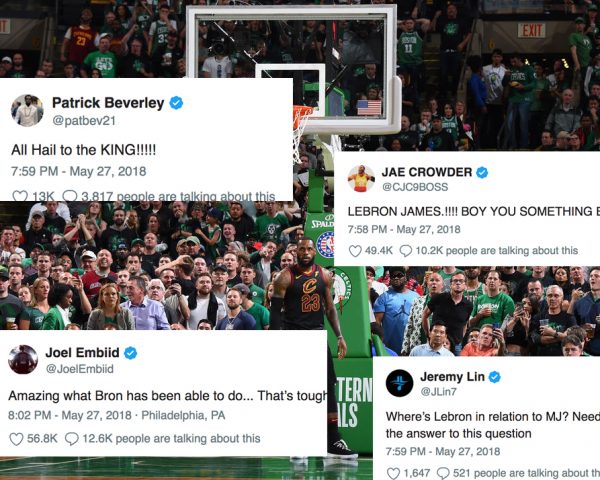 LeBron James reached the NBA Finals for the eighth straight time after leading the Cleveland Cavaliers to an epic 87-79 victory over the Boston Celtics on Sunday. The milestone almost did not come after the Cavs had trailed the Celtics 2-0 in the best-of-seven Eastern Conference finals series.

Again displaying his sheer will to win, James spearheaded Cleveland’s comeback. He led the Cavs to win four of the next five games, including a masterful Game 7 victory at TD Garden.

Playing all 48 minutes, James pounced Boston with 35 points and 15 rebounds. The King narrowly missed a triple-double as he finished with nine assists. His efforts helped the Cavs snap the Celtics’ 10-game home winning streak in this year’s playoffs.

After the series-clinching win, current and former NBA players shared their thoughts on Twitter. They praised James for accomplishing another historic feat.

Amazing what Bron has been able to do… That’s tough

Another NBA legend, Charles Oakley, also had something to say about James’ latest accomplishment.

Trust the body of work. The king did his thing. #kingjames

This last one is an interesting bit from Jeremy Lin.

Where’s Lebron in relation to MJ? Need help bc I really dont know the answer to this question

James reached the Finals four straight times with Miami from 2011 to 2014, winning two championships in the process. He did it again this time in Cleveland as the Cavs have not missed the Finals since he returned in 2015.

James led the Cavaliers to their first-ever NBA title back in 2016 against the defending champion Golden State Warriors.