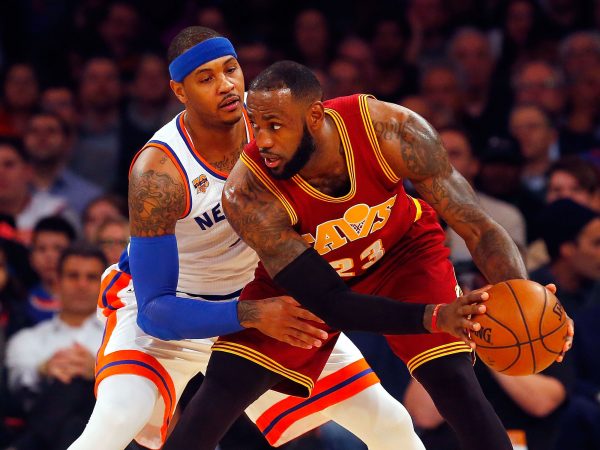 With the Cleveland Cavaliers and Houston Rockets still in pursuit for the services of New York Knicks star Carmelo Anthony, Sam Amico of AmicoHoops.net reports that the Cavs are first on the All-Star’s preferred destination list:

“That is not as much of a long shot as some are calling it. Word is, Anthony is angling to join the Cavs first, the Rockets second. And Knicks owner James Dolan loves Anthony just enough to write that monstrous buyout check, almost as a favor. (It would also clear all sorts of salary-cap space, benefiting the Knicks, too.)”

It’s highly likely that Anthony will be moved prior to this upcoming season’s start. ESPN’s Adrian Wojnarowski reported that the Knicks do not envision Tim Hardaway Jr. and Anthony starting the season together. The Knicks recently signed Hardaway Jr. to a four-year, $71 million deal, that includes some unusual provisions, including a 15 percent trade kicker.

Although Anthony was supposedly upset with Hardaway’s 2015 trade to the Atlanta Hawks, there’s long been rumors of discord between the two, making co-existence unlikely.

Here are some scenarios that could bring Anthony to Cleveland:

There's a couple of scenarios that could get Carmelo Anthony out of New York. What is the best option?
MORE: https://t.co/WGV4XO6q6E pic.twitter.com/HO3o0UbbNY