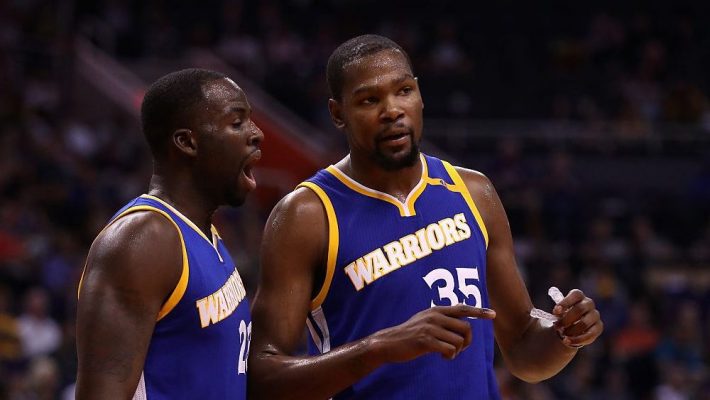 The mouth of Golden State Warriors forward Draymond Green is rarely closed as he often offers remarks on virtually any topic. However, teammate Kevin Durant put Green’s credibility in question on Sunday when he denied that Green contacted him immediately after the Warriors lost Game 7 of last year’s NBA Finals to the Cleveland Cavaliers in an effort to get him to sign with the team as a free agent.

Green had claimed last week that he first contacted Golden State general manager Bob Myers about the need to acquire Durant before then speaking with Durant himself. Both conversations purportedly had taken place even before Green had left the Oracle Arena parking lot, with the Warriors’ pursuit ultimately successful after Durant announced he was joining the team last July 4.

Last year’s NBA Finals had the Warriors holding the same 3-1 advantage they currently hold in their series against the Cavaliers, though this year’s Game 5 will will have both Green and Durant in the lineup for Golden State. That wasn’t the case last year, with Green suspended for the contest and Durant still a member of the Oklahoma City Thunder.

The Cavaliers managed to become the first team ever to come back from a 3-1 deficit in the NBA Finals, but this year face an even more monumental task. That’s because no NBA team has ever come back from a 3-0 deficit in a postseason series. However, like last year, the Cavaliers are seeking to break new ground and they’ll get their opportunity to take another step toward that goal when Game 5 tips off just after 9 p.m. ET on Monday night.