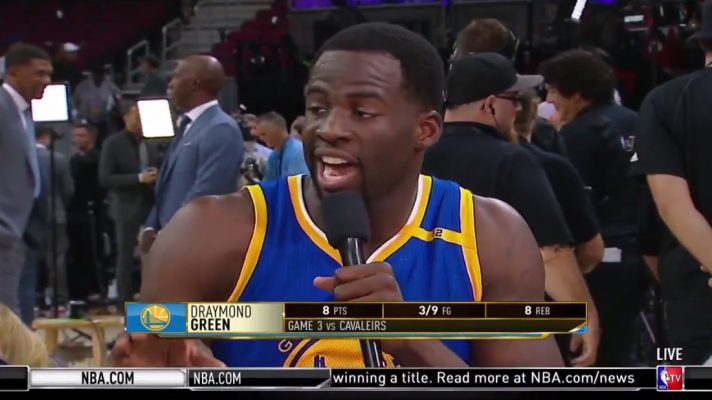 The Golden State Warriors are now just one win away from winning an NBA title — what would be their second in three years — after pulling off a stunning comeback victory over the Cleveland Cavaliers, 118-113, in Game 3 on Wednesday night.

At the end of the third quarter, the Warriors were trailing the Cavs 94-89, however, forward Draymond Green said he had sensed a weakness in superstar LeBron James as both teams prepared for that final quarter.

“I caught LeBron walking off at the end of the third quarter and you could just tell he was exhausted,” Green said. “He had got off the ball and just was letting Kyrie (Irving) go to work, trying to catch his breath. So we knew that they were starting to wear down and we just had to stay within striking distance.”

"I caught LeBron walking off at the end of the third quarter and you could just tell he was exhausted." – Draymond Green#NBAFinals pic.twitter.com/A7ns6WQKVc

James finished his evening with a game-high 39 points to go along with 11 rebounds and nine assists and frankly had every reason to be exhausted after those grueling three quarters.

The Cavs will look to stave off elimination on Friday night as they host the Warriors in Game 4 at 9:00 pm E/T.