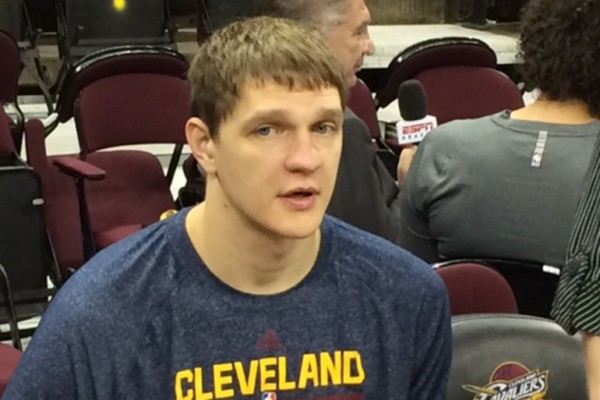 Timofey Mozgov is extremely frustrated and it has everything to do with his surgically-repaired right knee.

According to Chris Haynes of Northeast Ohio Media Group, Mozgov states that his knee is still bothering him, several months after having his knee scoped during the summer:

“My knee is not — I wish it could be like it’s not bothering me, but it is what it is. It’s bothering me, but we’re still working on it. Not before the first game, but in the close future, we will be good. I hope so.”

During Wednesday’s practice, the Russian center worked on his post moves with assistant coaches. The assistant coaches stressed the need for Mozgov to back down opposing defenders more often for closer field goal opportunities, rather than settle for long hooks outside of the paint. They went through these drills repeatedly throughout practice.

The Cleveland Cavaliers had three back-to-back sets this preseason, but Mozgov only participated in the final back-to-back set. The Cavs center said that he wanted to see how his knee felt before the regular season tipped off on October 27th against the Chicago Bulls:

“I’m happy with how my body responded to back-to-back, but I’m still not happy where my body is at right now. [I’m not happy] by the shape, by my knee, whatever.”

While Mozgov is not fully content with his knee, he did finish his thought by mentioning how he doesn’t think it’s that bad.

The team received a boost late Wednesday when it was reported that the Cavaliers had locked up Tristan Thompson to a five-year deal.

Although Mozgov is still clearly feeling the effects of offseason knee surgery, there will be less of a burden for the center now that another big man is back in the equation.