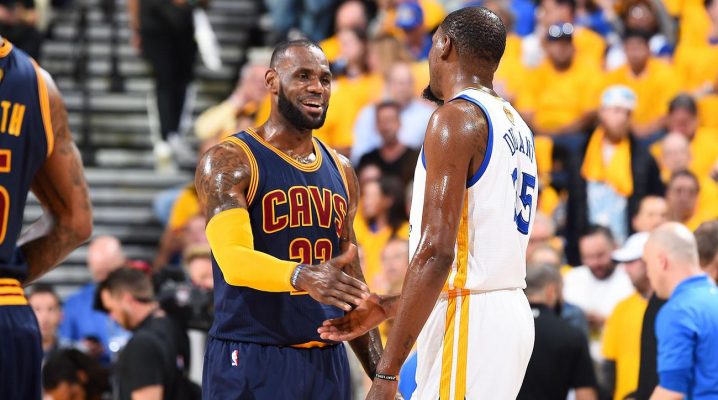 The current battle on the court between LeBron James of the Cleveland Cavaliers and Kevin Durant of the Golden State Warriors has sparked talk of which player is better and tossed aside any image that might indicate friendship between the two players. However, just six years ago, the two came together to record a hip-hop record that had seemingly gone completely under the radar, until a snippet of it was released on Monday.

ESPN’s Chris Haynes noted on Monday afternoon that the two players were practicing during the 2011 lockout in James’ hometown of Akron, when James was a member of the Miami Heat and Durant played for the Oklahoma City Thunder.

“Both players are music junkies, and in between workouts they decided to kill some time by writing their own lyrics and heading to the booth. One person who has heard the song says he recalls Durant rapping the first verse, James hopping on for the second and then Durant finishing it off. The song’s title and theme are unknown, as are its whereabouts. Durant, who produces beats in his spare time, is believed to have provided the instrumentals.”

Within a few hours, a brief portion of the song was released on Twitter:

The song nearly became a part of the movie “Thunderstruck,” which starred Durant. However, he chose to keep it under wraps, a move which which one agent lamented:

“I heard the track years ago during post production for Thunderstruck,” agent Eric Goodwin told Haynes. “It was very good. I suggested submitting it to Warner Brothers for the movie soundtrack, but KD wanted to keep it private.”

Both players are currently focused on the NBA Finals, with no indication that they even plan on offering a comment on the song at any point in the future.