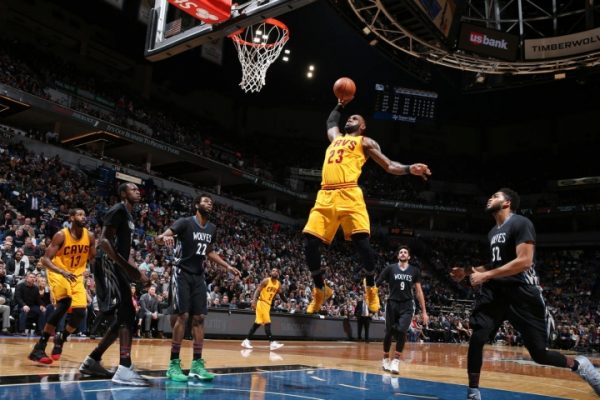 (Minneapolis, MN) – A revamped Big 3 of LeBron James, Kyrie Irving and Channing Frye combined for 71 points to help the Cleveland Cavaliers come away with a hard-fought 116-108 victory over the Minnesota Timberwolves at Target Center on Tuesday night.

James and Irving each tossed in 25 points, with James also picking up a double-double by adding 14 assists and eight rebounds and Irving contributing seven assists to the 27 the team compiled on the evening. Frye, starting in place of the injured Kevin Love, matched his season-highs in points and rebounds by also collecting a double-double with 21 points and 10 rebounds.

“We had to get stops and we had to make shots,” James said. “We’re a veteran team and we know how to approach the fourth quarter. That’s when we get calm.”

The Cavs weren’t able to put the Timberwolves away until the closing moments, clinging to a 109-106 lead with under three minutes to go in the contest. James then connected on a three-pointer with 2:06 to go to push the lead up to six and newcomer Derrick Williams followed up by stealing a pass and delivering a dunk with 1:39 left to essentially clinch the game.

“Tonight, just the way the defense was playing, I was able to get some three-point shots. Shot some good ones, shot some bad ones,” Frye said. “My motivation every day is to get better.”

Williams ended his night with 13 points and six assists, though Tristan Thompson had another strong performance by being the third member of Cleveland’s double-double club on the night. Thompson finished with 14 points and 11 boards.

“We just try to put him (Williams) in position to be successful until we can get some practice time and we can start implementing our sets,” James said. “He’s a freakish athlete, he’s a great defensive player, he rebounds exceptionally well and he runs.”

Williams himself admits he’s still on a learning curve when it comes to knowing exactly what to do on the court. However, he appreciates the situation he’s now in after spending the bulk of his career with losing teams:

At the start of the game, the Timberwolves went through a rollercoaster first quarter by jumping out to a 15-6 lead. That was aided by their making 6-of-8 from the field. The Cavs then put together a 13-2 surge, thanks to cold shooting from the Wolves. However, by the time the quarter had ended, Minnesota had regained its touch and held a 30-26 lead.

Both teams stayed hot in the second quarter, with the Timberwolves connecting from the field at a 55 percent rate while the Cavaliers were scorching the nets at 70 percent. In addition, Cleveland held a 14-6 advantage on the boards during the period, while each team dished out 10 assists in those 12 minutes. Thanks to their torrid touch, the Cavs took a 69-61 lead into the halftime locker room.

“A few shots I would give to Kev (Love), I’ll give to Channing,” Irving said about the adjusted offensive approach. “We need to have an aggressive mindset.”

For the first six minutes after the break, the Cavaliers stood on the verge of breaking the game open by extending their lead to 87-73. However, the Timberwolves dominated play for the rest of the period, going on a 20-6 run to deadlock the game with one quarter left to play. The key to their comeback was the Cavs’ ice-cold shooting that saw them miss 10 of their last 12 field-goal attempts.

“I’m their leader. I’m their commander,” James said. “It’s up to me to set the pace. I have to make sure these guys are locked in.”

The Cavaliers play their final game before the All-Star break on Wednesday night when they host the Indiana Pacers at Quicken Loans Arena. The game will tip off shortly after 7 p.m. ET.