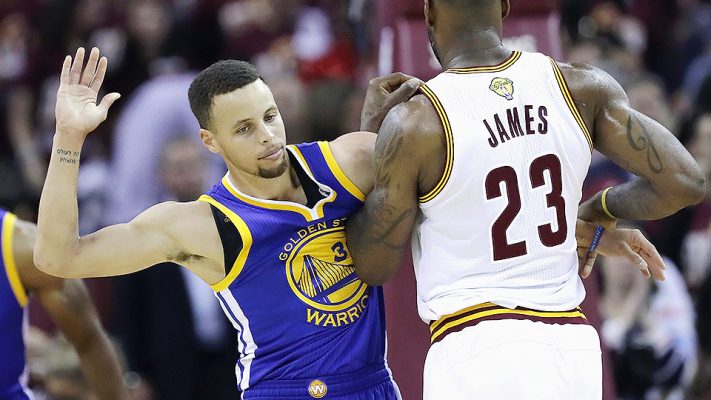 As the buildup toward Thursday’s Game 1 of the NBA Finals continues, players from both the Cleveland Cavaliers and Golden State Warriors are zeroing in how to win this rubber match. On Sunday, Warriors guard Stephen Curry noted that having played the Cavs in each of the past two Finals, he and his team have a familiarity with the defending champions and spoke about Golden State’s motivation entering the series:

“For the most part, you know what LeBron (James) does, you know what Kyrie (Irving) does,” Curry said. “You know kind of their style and familiar with that. Other than that, I think when you look at the whole squad, they have a good kind of chemistry and vibe. It looks like they’re having fun, and we want to do something about that.”

That motivation on the part of the Warriors is based on their having blown a 3-1 advantage in last year’s Finals, with Curry also looking to atone for his play in Game 7. Shooting 6-of-19 from the field and scoring just 17 points, he was also guarding Irving when the Cavs point guard drilled the game-winning shot. That was followed by an inability to get off a good shot against the supposedly defensively deficient Kevin Love.

Some Curry supporters have attempted to claim that the reasons for last year’s struggles in the Finals were that he wasn’t 100 percent healthy. The problem with that assessment is that no such claim was made after Game 4, when he scored 38 points to give Golden State that commanding lead in the series.

While the Warriors held a decided edge in regular season wins this season at 67-51, the two teams each rolled through the postseason. Golden State won all 12 of its contests, while the only Cavaliers loss came on a buzzer-beater against the Boston Celtics. Both teams are also at full strength, which will limit any potential excuses once the series is completed.

Game 1 tips off on Thursday night just after 9 p.m. ET at Oracle Arena in Oakland.