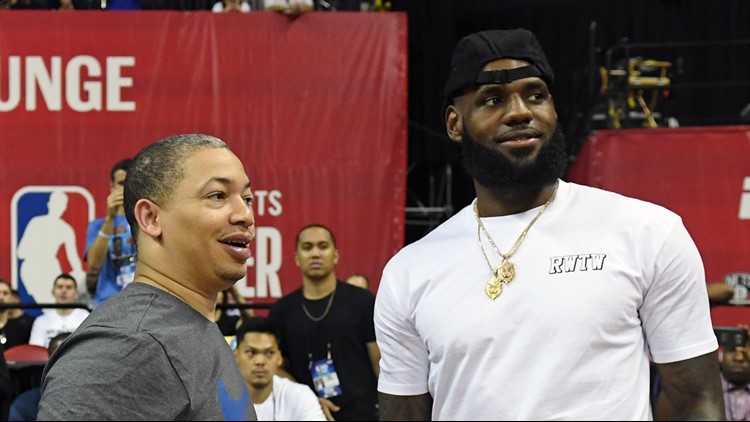 Former Cleveland Cavaliers forward LeBron James’ first season with the Los Angeles Lakers turned out to be a disappointment and resulted in the departure of head coach Luke Walton.

One NBA insider indicates that James’ past connection with former Cavs head coach Tyronn Lue make it seemingly inevitable that the Lakers will end up hiring Lue for the job.

And now for some analysis: LeBron James is a Laker for at least TWO more years. Surely the Lakers understand James would be at his happiest and most engaged playing for Ty Lue. Hiring Lue is the obvious move for the Lakers — let's see how soon they make it

Lue arrived as an assistant coach with the Cavaliers in 2014, the same year that James returned to the team after playing four years with the Miami Heat. In January 2016, Lue was elevated to the head coaching position following the dismissal of David Blatt, and led the team to its first-ever NBA title five months later.

James was obviously the central component in Lue’s lineups, with that connection helping the Cavaliers compile a regular season record of 128-77 during their time together in Cleveland. In the postseason, the team won 41 of its 61 contests.

The Lakers are coming off a 37-45 season that saw James play in just 55 games because of injury. He did finish with strong statistical averages of 27.4 points, 8.5 rebounds and 8.3 assists per game, but the fact that he didn’t play in the postseason for the first time since 2005 presumably dulled any satisfaction with those individual numbers.

Lue doesn’t need the job, considering he has two seasons left on the five-year, $35 million deal he signed in 2016. Yet having been fired last October following an 0-6 start, he’s likely eager to once again patrol the sidelines and show his abilities as a coach. Having James once again in his lineup helps offer this potential reunion a good chance for success.