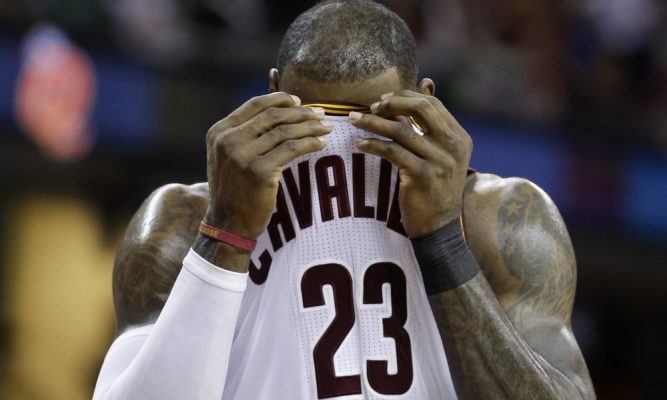 The uncharacteristic struggles that LeBron James had during the Cleveland Cavaliers‘ 111-108 loss in Game 3 of the Eastern Conference Finals were hard for many to fathom, given his previously dominating string of performances. However, it now appears that an illness served as the main culprit in his 11-point performance, in which he connected on just 1-of-8 from the field during the second half.

Teammate Richard Jefferson spoke about the situation following the Cavaliers’ 112-99 Game 4 victory. He indicated that James was reluctant to bring that fact up, lest it be dismissed as an excuse.

“You have to do things to try and get guys in rhythm, and it’s OK — LeBron’s allowed to not be in rhythm,” Jefferson said. “And what’s so funny is that I know he won’t talk about it, so I’ll give my big guy a shot is Deron Williams missed shootaround this morning because he had like a little bug — just really lethargic, had no energy — and I think that’s what ‘Bron had.

“And sometimes these little bugs can go around, and that’s really why. He was like, dude, when Deron didn’t show up to shootaround, it kind of started clicking in his head, because for him, it was more of like, ‘I don’t know why I was so lethargic, why I had no energy. I had nothing.’

“So, these little things happen. It was no panic. Look, he was lethargic, they hit a bunch of tough shots, and if Marcus Smart doesn’t go 7-for-10 from three, we’re not even talking about it.”

Those struggles appeared to continue during Tuesday night’s first half, with James picking up his fourth foul with 6:45 left in the second quarter. The situation forced him to the bench for the remainder of the half, but he re-emerged, especially in the crucial fourth quarter, when he scored 15 points and helped put the game away to give the Cavs a commanding 3-1 advantage in the series.

If that finish was a precursor to his past playoff performances so far this postseason, the Cavaliers stand an excellent shot at clinching the series in Boston in Thursday night’s Game 5. Should the Cavaliers win, they’ll meet the Golden State Warriors for the third consecutive year in the NBA Finals.