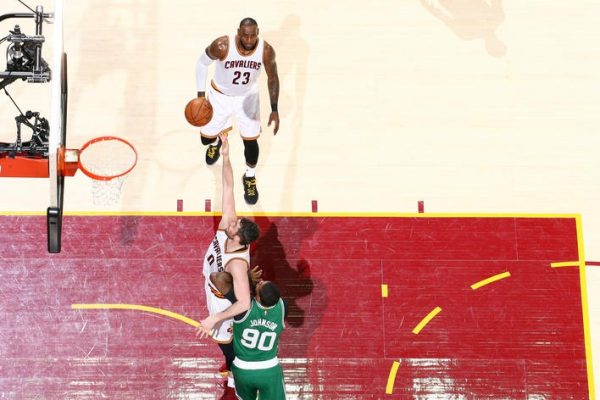 (Cleveland, OH) – Avery Bradley’s 3-pointer with less than a second remaining completed a second-half comeback for the Boston Celtics as they stunned the Cleveland Cavaliers with a 111-108 win in Game 3 of the Eastern Conference Finals at Quicken Loans Arena on Sunday night. The Cavs still lead the series 2-1, but missed a golden opportunity to take a commanding 3-0 lead.

“Al Horford got a good screen on T-Top (Tristan Thompson), he (Bradley) was open, it bounced on the rim for a little bit,” Kyrie Irving said in explaining what happened on the final play. “They got a win and we got a slice of some humble pie. They hit us in the mouth, now it’s our turn to hit back.”

Jonas Jerebko’s jumper with 22 seconds to go gave the Celtics a 108-106 lead, with Irving then knotting the score for the Cavaliers on a layup with 10.7 seconds to play. That gave Boston one last chance that they converted on with Bradley’s 3-pointer. The win came despite the absence of the Celtics starting point guard Isaiah Thomas.

“When you get momentum like that, you almost knew that last shot was going in,” LeBron James said in explaining how the Cavs watched a 21-point advantage disappear. “A lot of things went wrong. They kept us at bay, made a lot of plays and neutralized what we wanted to do.”

What had looked like another blowout win for Cleveland in the first five minutes of the third quarter dramatically changed by the time the period had concluded. The Cavaliers had held a 77-56 advantage, only to see the Celtics go on a 26-10 surge for the rest of the quarter. Just like Cleveland had done in the first half, Boston took advantage of the three-point shot to close out the period with a deficit of just five points at 87-82.

In the opening moments of the final quarter, the Celtics could have potentially taken the lead on two occasions before they tied the contest at 95 with just under six minutes to go in the game. Up to that point, the Cavs had shot a miserable 27 percent during the second half, including 2-of-17 from three-point land.

“We only hit two 3-pointers in the second half,” Cavaliers head coach Tyronn Lue said. “When that happens, you have to get stops. I just think we weren’t as physical as we needed to be.”

The Celtics finally did take a lead at 99-98 on a Kelly Olynyk basket with 4:22 left, with the lead getting traded a number of times over the next few minutes. With 45 seconds left, Al Horford’s basket gave Boston a 106-103 lead, but J.R. Smith answered for Cleveland with a 3-pointer with 36 seconds left to tie the game, leading to the final drama.

One of the main contributors to the collapse was the Cavs’ miserable second-half shooting. They managed to hit on just 11-of-35 from the field for a 31 percent success rate.

“They moved the ball exceptionally well. I give them credit because they played well. We have to play better,” Thompson said. “We scored enough points to win tonight. We have to play defense.”

After a collection of monster performances, James suffered a rare off night, scoring just 11 points, while also grabbing six rebounds and dishing out six assists. He scored just three second-half points, struggling by connecting on just 1-of-8 from the field in those last two quarters.

“He’s (James) allowed to have a night like that,” Lue said. “He just had a tough shooting night.”

James didn’t shy away from acknowledging his rough night:

“Personally, I didn’t have it tonight,” James said. “That’s all I have to say about it.”

The second-half effort was a sharp contrast to the Cavaliers’ first half performance, when they connected on 60 percent of their shots from the field. A good portion of the damage was delivered via 14 long-range bombs. During the first quarter, they drilled nine 3-pointers and followed up with five more in the second period and actually had a better shooting percentage on triples at 64 percent.

During the opening two quarters, the Cavaliers maintained the advantage for virtually all 24 minutes. Only a few flaws kept the game from becoming another blowout, with Boston’s solid ball movement delivering 15 assists on their 20 baskets, and the nine turnovers committed by Cleveland.

“We still need to rebound, play defense and hold onto the basketball,” Lue said.

The Cavaliers will attempt to go up 3-1 when they play Game 4 on Tuesday night, with tipoff set for just after 8:30 ET. Should they win that clash, they’ll head back to Boston for Game 5 on Thursday night.

“I’m kind of glad it happened,” James said. “During the postseason, you have to face adversity. We have to get back to playing desperation basketball.”