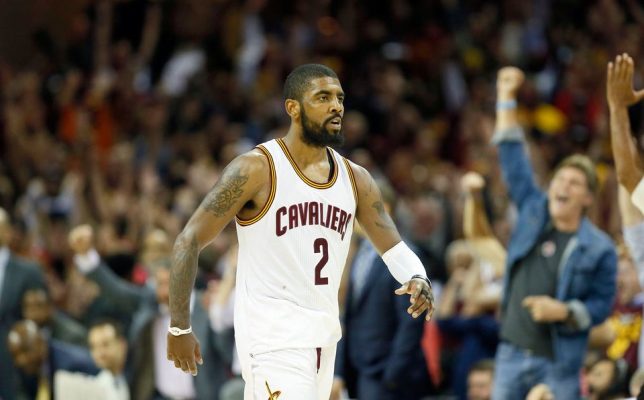 (Cleveland, OH) – Using 21 third-quarter points from Kyrie Irving and 15 fourth-quarter points from LeBron James, the Cleveland Cavaliers bounced back from a miserable first half to defeat the Boston Celtics, 112-99, to take a commanding 3-1 series lead in the Eastern Conference Finals at Quicken Loans Arena on Tuesday night.

The Cavs had trailed by as many as 16 during that first half, showing many of the same issues that resulted in their stunning Sunday night loss. Then, with 9:30 left in the third quarter, they found themselves behind by a 61-50 score. It was at that point that they went on a 37-19 run for the remainder of the period.

Leading that charge was Irving, who notched 21 points during that third period, scoring in seemingly every way possible and hitting 9-of-10 from the field. A brief scare occurred with 1:45 left in the third, when he scored on a layup but remained down, wincing and holding his ankle. However, he stayed in the game.

“I wasn’t coming out, I knew how much our team needed this game,” Irving said.

James eventually gave the Cavs the lead back at 73-72 with 3:15 left, though he missed a golden opportunity to do it a minute earlier when he missed a dunk. Still, by the time the third quarter had ended, Cleveland held an 87-80 advantage, shooting 76 percent (16-of-21) from the field for the quarter.

“It was a conscious choice on our part on how much we wanted it,” Irving said. “It was one of those games where we had to fight through it. In the back of my mind, I was thinking, ‘They cannot tie up this series.’ We had to look adversity in the face and say, ‘You’re not going to win here.'”

Picking up where Irving left off, James tossed in his 15 points during the crucial fourth quarter, with that effort helping to shake off the bad taste from his struggles in the Game 3 defeat. During that final period, the Cavaliers never allowed the Celtics to get any closer than six points before pulling away in the final minutes.

“We came out in the second half and buckled down on defense.” James said.

The duo ended up combining for 76 points, with Irving racking up 42 points and four assists, the point total marking a playoff high for the six-year veteran. James added 34 on the night, adding six assists and five rebounds, bouncing back from a tough first half in which he sat out the final 6:45 after collecting his fourth foul. Ironically, when he returned for most of the second half, he wasn’t whistled for any fouls.

“He (Irving) saw ‘Bron went out and decided to put the team on his shoulders and his back and just let us ride him until ‘Bron got back,” Cavs head coach Tyronn Lue said. “He did that and we put him in some good situations. Iso, where he’s one of the best in the league and he produced for us. He got to the basket, we iso’d him at the elbow and got fouls. So, he really stepped up and really put us on his back in the second and third quarter, and then LeBron came in the fourth and in those last six minutes really sealed the deal.”

The last component of the Big 3, Kevin Love, also had a strong night that was somewhat obscured by the performances of his teammates. Love finished with a double-double by scoring 17 points and also grabbing 17 rebounds. Love spoke about the difficulty of facing a Celtics team that’s missing Isaiah Thomas:

“I think they’re just playing free, it’s hard to pinpoint one thing,” Love said. “They made us dig deep. At halftime, we made some defensive adjustments and we needed it. We played inspired basketball.”

James spoke afterwards about his unique situation of having to sit because of foul trouble:

“My rhythm was broken,” James said. “When that happens, you have to find ways to get it back. For me, that was driving to the basket and putting up pull-back jumpers.”

The Cavaliers will try to clinch the series on Thursday night in Game 5, which will take place in Boston. Tipoff is set for just after 8:30 ET, with a victory that will send them to the NBA Finals for the third consecutive year against the Golden State Warriors.

“We have to go there with a bunker mentality,” James said. “We have to defend, execute and keep turnovers to a minimum.”