Don't Miss
Home / Rumors / Report: Kyrie Irving Didn’t Like Tyronn Lue at All, Treated Him Like a Stranger 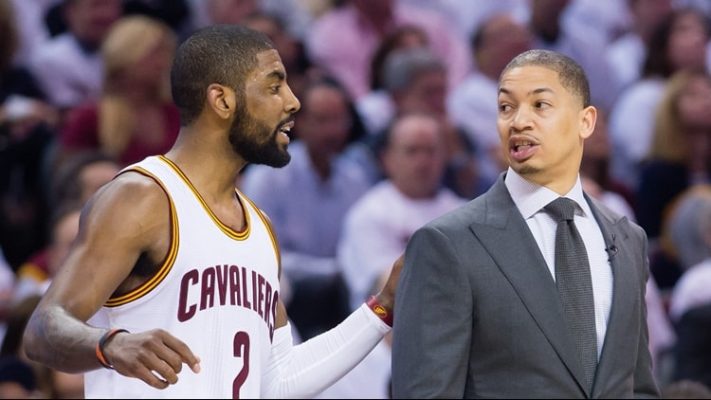 When Kyrie Irving asked to be traded from the Cleveland Cavaliers last July, one of the purported reasons was that he no longer wanted to play in the shadow of LeBron James. It now appears that the lack of any sort of meaningful connection with Cavs head coach Tyronn Lue may have also played a role in Irving’s request.

A roundtable of Cavaliers reporters appeared on a Cleveland sports radio program on Thursday. ESPN’s Dave McMenamin recounted a story (at around the 35-minute mark) about a conversation he had with Lue, in which the journalist lamented the fact that he was unable to connect with Irving:

“Ty said something to the effect that, ‘Don’t try to waste your time figuring out Kyrie Irving. You’ll drive yourself nuts.”

Their lack of a relationship was largely connected to Lue’s remarks upon taking the job in June 2016, according to Joe Vardon of Cleveland.com (at the 33-minute mark):

“When Ty took the job, the first things he did was he took shots privately and publicly at Kyrie and Kevin [Love], basically telling them, ‘You have to put your brands to the side, defer to LeBron, focus on winning.'”

Once Irving left, he got a measure of revenge by taking his own shots at Lue’s coaching abilities on two occasions. That led into a brief analysis by Jason Lloyd of the Athletic (at the 33:45 mark) about how Irving had problems with many of coaches with the Cavaliers:

“Kyrie’s never liked his coach. He liked Byron [Scott] at first, and by the end, Byron even acknowledged to me that Kyrie had changed. He never gave Mike Brown a chance, and that went back through his agent. His agent had represented Larry Hughes, and Mike Brown and Larry Hughes never got along, and there’s a wide belief that that sort of poisoned the well with Mike’s relationship with Kyrie. Kyrie never gave Mike a shot. Kyrie never had a lot use for David Blatt, he’s not alone, then with the Ty Lue thing.”

Lue will now have a chance to work with rookie guard Collin Sexton under much different circumstances than when he first took the Cavs’ head coaching job. Now, with Irving in Boston and James having departed for Los Angeles, the intense spotlight on the team is gone and the pressure to challenge for a championship next year has faded. That should allow Lue to build a stronger bond with Sexton as the team begins to rebuild.