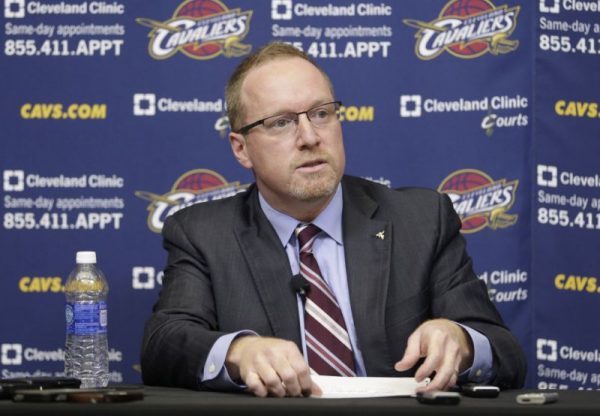 The success of the Cleveland Cavaliers over the past few years has largely been driven by LeBron James, but even he has applauded the work of the team’s general manager, David Griffin, in filling out the team’s roster. However, Griffin’s contract expires at the end of the season and at least one team is reportedly interested in hiring him right away.

According to Adrian Wojnarowski of The Vertical, that franchise is the Orlando Magic, which dismissed its general manager, Rob Hennigan, last week. Griffin’s representatives have been unable to work out an extension with Cavs owner Dan Gilbert over the course of the season thus far. Wojnarowski wrote that Griffin is definitely among the candidates considered to replace Hennigan.

The current status of Grffin is in contrast to those of both the team roster and the coaching staff. At present, the Cavaliers have a league-high payroll of $126 million and last year signed head coach Tyronn Lue to a five-year deal worth $35 million.

At present, Magic assistant general manager Matt Lloyd is running the team as it prepares for both the NBA draft in June and free agency in July. Orlando won’t be able to speak with Griffin until the Cavaliers’ season ends, which might not occur until mid-June.

If the Magic hasn’t hired anyone by that time, the Cavs could be vulnerable to losing Griffin. While Griffin himself hasn’t indicated any desire to leave, a potential departure would likely anger James, Lue and other key personnel connected with the team. That could make the team’s situation problematic over the next few years.

Currently, Cleveland is one win away from advancing to the Eastern Conference semifinals.