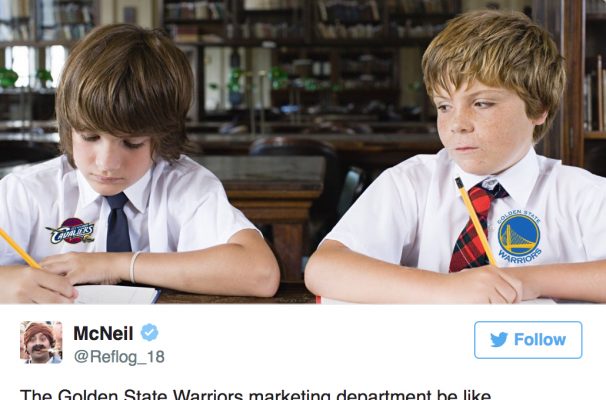 The rivalry between the Cleveland Cavaliers and Golden State Warriors over the past few years has grown to a point that the two teams now apparently share playoff slogans. Of course, in this particular instance, the Warriors appear to have simply copied off the Cavaliers, which has led to the Warriors hearing about it on social media.

The weapon of choice in this case was Twitter, with a number of fans unleashing their fury about the lack of originality on the part of the Warriors’ marketing department.

"Copy the homework, just change it a little" @warriors pic.twitter.com/eGwBOvDVwb

You vs the guy she tells you not to worry about #DefendtheLand @cavs pic.twitter.com/6iGpNs4nzD

The Golden State Warriors marketing department be like… #DefendTheLand pic.twitter.com/TWmPUlJLkQ

"Hey, what should our playoff shirts say?"

Golden State's marketing department is as original as… pic.twitter.com/lXExdbRjMu

Remember, we stole your 3-1 lead. pic.twitter.com/pCsBv6Gaab

After the Cavaliers knocked off the Indiana Pacers on Monday night to go up 2-0 in the Eastern Conference quarterfinals, the Cavs now find themselves 10 wins away from reaching their third consecutive NBA Finals. In the Western Conference, the Warriors are favorites to also reach their third straight finals. Should that occur, it will mark the first time in NBA history that two teams have met in the finals for three straight years. Right now, the Cavaliers are currently leading in the originality department.