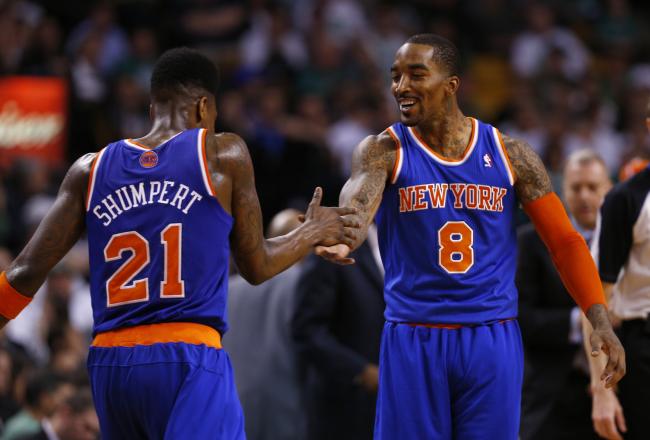 Now that the dust is settling from the monster three-way trade involving the Cleveland Cavaliers, New York Knicks and Oklahoma City Thunder, it’s time to take a look at the potential impact this transaction will have on the Cavaliers.

Currently, the trade helps bolster the current lack of depth in the backcourt, but does nothing to address the team’s problems in the paint. That situation was already weak before the season-ending injury to Anderson Varejao two weeks ago.

To that end, Adrian Wojnarowski tweeted as Monday’s trade was developing that the Cavaliers are still in pursuit of Denver Nuggets‘ center Timofey Mozgov. However, the Nuggets are leaning toward holding onto the seven-footer, according to league sources. Speculation about Mozgov being traded to the Cavs dates back to last summer.

Regarding the players that are coming to Cleveland, J.R. Smith has had an up-and-down career with the Knicks, often making as much news off the court than on it. Still, he is averaging just under 11 points and 3.4 assists per contest this season, connecting on 37 percent of three-point attempts. For his career, those numbers are even higher.

Last week, Smith returned to the court after sitting out three weeks due to a heel injury. In his two starts, he has averaged over 18 points per game, but with the Cavs, he’ll probably be used in a sixth-man role, essentially taking the place of Waiters.

Perhaps more importantly, LeBron James was apparently consulted about the possible addition of Smith and gave his assent. The relationship between the two players is strong, with Smith in his 11th season in the league. Like James, Smith went straight from high school to the NBA, with Smith often coming to Akron to train with James during the offseason.

That close connection may prove to be beneficial for Cleveland, since Smith’s motivation has always been a question mark. Going from the worst team in the league to one that at least has the potential to contend for a title should be reason enough for Smith to gain inspiration, but James’ presence also figures to be a factor.

With Iman Shumpert, the Cavs have taken a big step toward improving their poor defense. While his scoring (averaging 9.3 points per game) will help somewhat, that area should remain in good shape once the Big Three (James, Kyrie Irving and Kevin Love) are all back together.

Shumpert was taken 16 spots after Irving in the 2011 NBA Draft, but has had more of an impact with his ability to stop opposing defenders. With quick hands, he has a knack for forcing turnovers and can apply solid pressure in one-on-one situations. His willingness to take chances with his defense will hopefully rub off on the remainder of the squad.

One temporary drawback is that Shumpert figures to be rusty when he joins the Cavaliers, since he’s missed the last three weeks due to a dislocated shoulder. During the 2012 playoffs, he suffered a torn ACL on the same day that Chicago Bulls’ guard Derrick Rose suffered the same injury.

Given the injury woes Cleveland is currently enduring, the potential each player brings for the remainder of this season makes the deal worthwhile. However, until the Cavs are able to find a way to add a big man to the front line, the potential of going deep in the postseason might be difficult to accomplish this season.