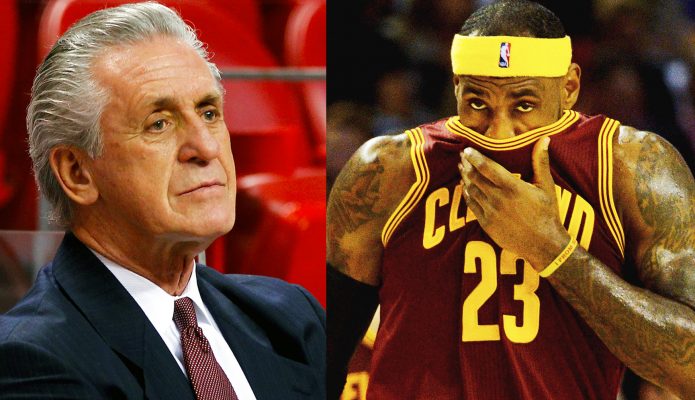 The news in July 2014 that LeBron James was returning to the Cleveland Cavaliers brought a variety of different emotions, including anger from Miami Heat team president Pat Riley and delight in Cleveland. That’s because Riley’s dream of extending a streak of four consecutive trips to the NBA Finals had effectively ended.

In Wright Thompson’s ESPN.com article on Riley, the negotiations with James are noted, beginning with Riley and members of his front office traveling to Las Vegas to meet with James and his representatives. The following was part of the Heat’s elaborate sales pitch:

“Riley told his lieutenant, Andy Elisburg, to get the two championship trophies LeBron had won and pack them in their hard-shell carrying cases. Elisburg also brought charts and an easel for a presentation about the free agents the Heat would pursue. The day of the meeting, a hotel bellhop followed them with a luggage cart carrying the presentation and the two trophies. Riley brought wine from a Napa vineyard named Promise.”

The choice of wine was significant, since James’ business manager, Maverick Carter, had given it to Riley in 2010 after James had decided to sign with the Heat.

“Riley respects Carter, and when he walked into the suite and saw James with agent Rich Paul and friend Randy Mims but no Maverick, part of him knew the meeting wasn’t sincere. He told Elisburg to keep the trophies and easel in the hall. James and his associates were watching a World Cup game, which they kept glancing at during the presentation. At one point, Riley asked if they’d mute the TV.”

When Riley and the Heat contingent headed back to Miami, he had a bad feeling about what had transpired. He eventually received a text that had indicated a phone call would be forthcoming. That call came approximately 15 minutes later, with Paul on the other end. The phone was then handed to James, who told Riley, “I want to thank you for four years …”

Riley reflected on what he was thinking at the time:

“I was silent,” Riley says. “I didn’t say anything. My mind began to just go. And it was over. I was very angry when LeBron left. It was personal for me. It just was. I had a very good friend who talked me off the ledge and kept me from going out there and saying something like Dan Gilbert. I’m glad I didn’t do it.”

The Gilbert comment was in reference to the angry comments made by the Cavs owner in the immediate aftermath of James leaving in 2010.

Since returning to Cleveland, James has led the Cavs to two consecutive finals appearances, making that six consecutive trips for the future Hall of Famer. The Cavaliers are currently waiting to begin the second round of the NBA playoffs after sweeping the Indiana Pacers in the conference quarterfinals.