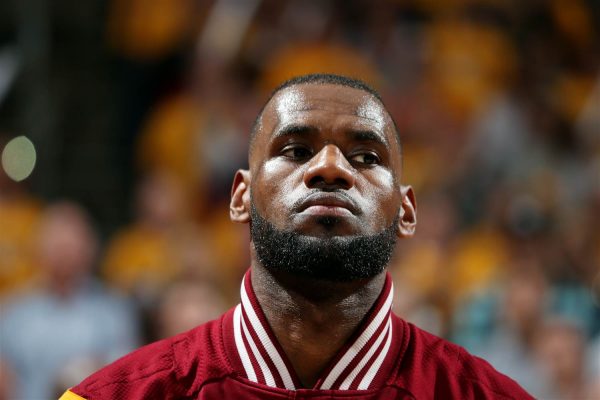 With the NBA postseason set to get underway on Saturday, Cleveland Cavaliers forward LeBron James is exuding confidence in his team’s ability to win its second consecutive title. That’s despite numerous critics pointing to the team’s struggles during the past few months and its four-game losing streak to end the season.

James spoke following the team’s practice on Thursday about how the Cavaliers still have a very good chance to win, even though he offered no details as to what’s serving as his motivation:

“I’ve got the answer. I’m not giving it to you,” James said, after the second-seeded Cavs practiced in preparation for Game 1 of their first-round series against the Indiana Pacers. “But I’ve got the answer why I feel like we’ve got a great chance.”

Those critics will point to the team’s 10-14 record since March, and its .500 record (23-23) over the final 46 games. Plus, since the All-Star break, the team’s defense is ranked 29th in the NBA and 22nd for the season. Major reasons why those struggles took place were key injuries that led to 22 different players wearing a Cleveland uniform during the regular season.

“I think through everything that went on with our team, we’re in a position where we can do something special still,” James said. “At the end of the day, I’m not going to harp on what happened in the regular season through injuries, through bad losses, through good wins, through whatever the case may be. We have a good club going into the postseason. That’s all you can ask for.”

James and Kyrie Irving sat out the final two games of the regular season, which means that both will be playing in Game 1 on Saturday against the Indiana Pacers with five days of badly needed rest.

“Like I said it’s been strange events this season, unfortunate events, some of them bad, some of them good but at the end of the day I can’t have my mind focused on the past now,” James said. “The present is the only thing that matters. Me preparing this group, me getting this group locked in and understanding what our opportunity is, I mean it is what it is. Let’s get ready to go. We’ve got to have our mind sharp, our bodies as fresh as possible going into Game 1 on Saturday.

“You guys can harp on the regular season. I’m not one to do it, not with the postseason starting right now,” James said. “You guys are trying to drain my energy. I just told you I feel great. Don’t do that to me. I feel good. I’m not going backwards.

One number that may explain why James is so confident is that in his five previous playoff appearances on a second-seeded team, he’s reached the NBA Finals each time. For the upcoming series against the Pacers, he’s also is aware of his personal playoff history that shows he’s never lost a first-round series, managing a dominating 40-7 record over the last decade.

Last year, James revealed his “secret” motivation after beating the Golden State Warriors in Game 7 of the finals, which was an unnamed confidant in Miami (presumably Pat Riley), who told James that leaving the Miami Heat for the Cavs was a mistake.

James has made it to six consecutive finals and is undoubtedly focused on making every effort to increase that number to seven this season. Should the Cavaliers reach that point, their likely opponent will either be the San Antonio Spurs or the Warriors.