J.R. Smith Trolls Warriors When Asked About His Injury Recovery 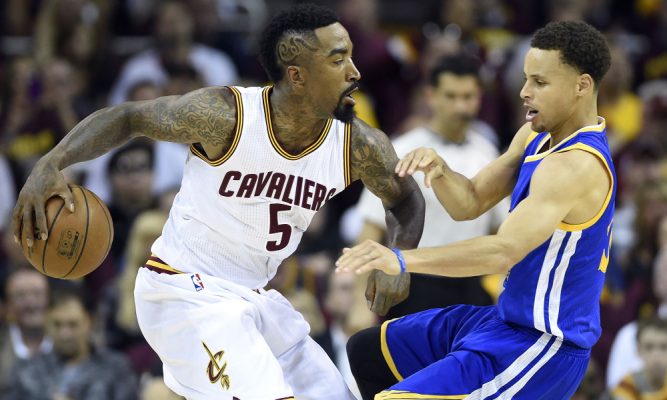 Although the Cleveland Cavaliers lost newcomer Andrew Bogut (tibia) for the rest of the season on Monday night, sharpshooter J.R. Smith (thumb) is expected to be back very soon.

Once Smith returns, he’ll come back to a completely renovated lineup that now features the likes of Kyle Korver, Deron Williams and Derrick Williams. When asked about the challenge of integrating his game with the new guys, the champion had a clever response, per Dave McMenamin of ESPN.com:

“It will be difficult,” Smith said, “but being down 3-1 [in the NBA Finals] is difficult.”

Smith, 31, was obviously referencing the Cavs’ amazing comeback against the Golden State Warriors in last June’s NBA Finals. The veteran was the fourth leading scorer, with 11.5 points per game, behind the Big 3 during the team’s 2016 postseason run.

This season, however, has been a different story for the journeyman. In 21 games, Smith has averaged 8.6 points and 1.2 assists, his lowest numbers since his sophomore season in the league. After going down with his thumb injury in late December, Smith and his wife also shared some sad news in January about the premature birth of their daughter Dakota.

Needless to say, the past few months have been tough for the 13-year veteran. However, getting back on the court and poking fun at the Warriors is a great first step into turning all that negativity into positivity.