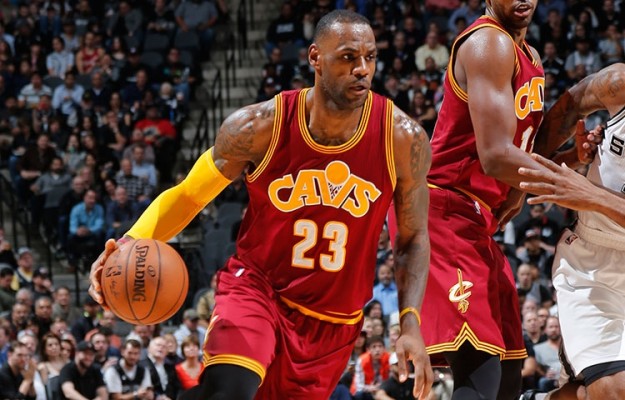 (San Antonio, TX) – Going cold in the fourth quarter proved to be the dagger in the heart of the Cleveland Cavaliers’ eight-game winning streak as they dropped a 99-95 decision to the San Antonio Spurs at AT&T Center on Thursday night.

Clinging to a slim 73-72 advantage with one quarter left, the Cavaliers scored the first basket to boost the margin to three, but then watched the Spurs run off 13 unanswered points to make it 87-77. Key to this stretch was the Cavaliers missing 9-of-10 field goal attempts, while also committing a pair of turnovers.

The Cavs got within five at 93-88 with 1:11 left, but Tim Duncan’s turnaround jumper with 55.9 seconds left blunted the last ditch effort. Then, San Antonio was able to get the rebound on the second of Tony Parker’s two free throw misses and converted a pair of free throws with 9.7 seconds left to officially put the game away.

LeBron James ended the night with a team-high 22 points, with each member of the starting five finishing in double figures. James also contributed seven rebounds and five assists, while the duo of Tristan Thompson and Kevin Love each finished with a double-double. Thompson scored 18 and grabbed 14 rebounds, while Love had 10 points and 12 boards.

“Their place in the history books is already written,” said James. “It’s just up to them when they want to decide that there’s no more ink in the pen.”

While there’s no indication of any health issues, James spoke about his status for tomorrow night’s game in Houston, since it’s the latter half of a back-to-back:

“I plan to play tomorrow night, but I’ll talk with Coach (Blatt) in the morning,” said James.

The output of the starting unit was in contrast to the 12 points offered by the bench. In comparison, the Spurs’ reserves collected 35 points between them. Another negative came in the fact that Cleveland ended the game with more turnovers (17) than assists (15).

Cleveland’s six-game road trip comes to an end on Friday night when they finish their Texas trio of games with a matchup against the Houston Rockets. Tipoff for that game, which will be nationally televised on ESPN, will be just after 9:30 p.m. ET.