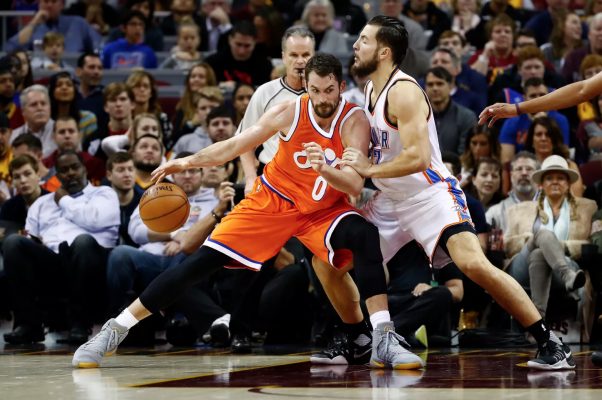 According to Joe Vardon of Cleveland.com, the Cleveland Cavaliers and more specifically, Cavs head coach Tyronn Lue, allowed Kevin Love to play in at least three games with an injured left knee. Five days after playing on the second night of a back-to-back in Oklahoma City, Love underwent arthroscopic surgery on his knee and is scheduled to be out for six weeks.

Prior to Wednesday night’s game against the Indiana Pacers, Lue spoke about the circumstances surrounding the injury:

“It was already (hurt), loose bodies were already in there so he just played through it and then after it got to a certain point he got the MRI and he found out it was loose bodies floating around,” Lue said.

Lue was also asked if he regrets playing Love, who was assumed to be sitting out that Oklahoma City game, along with LeBron James and Kyrie Irving:

“No, because he was already heading for surgery,” Lue said.

Vardon indicated that some controversy exists within the organization about Lue’s recall of the situation:

“A team source later refuted Lue’s characterization of some of the events, arguing that while the team was aware Love had banged his knee prior to the Indiana game, the Cavs didn’t know there was a problem until it swelled prior to playing against the Nuggets on Saturday.”

The need to give players some added rest over the course of a season is done by a team with the mindset of looking toward playing deep into the postseason. Lue remains in the process of trying to figure out how to give both James and Irving time off over the final two months of the regular season.

“Guys are going to get their proper rest going forward,” Lue said. “I definitely have to figure it out, and with the additional guys that we have now and Kay (Felder) and Liggs (DeAndre Liggins) and those guys can step up and be ready to play. D-Will’s (Derrick Williams) been great for us. So guys just have to step up and be ready to play. We do have to manage that and we’ll see what’s right.”

Both James and Irving will be playing in Sunday’s All-Star game in New Orleans, with the Cavaliers set to resume play on Feb. 23 with a home game against the New York Knicks.