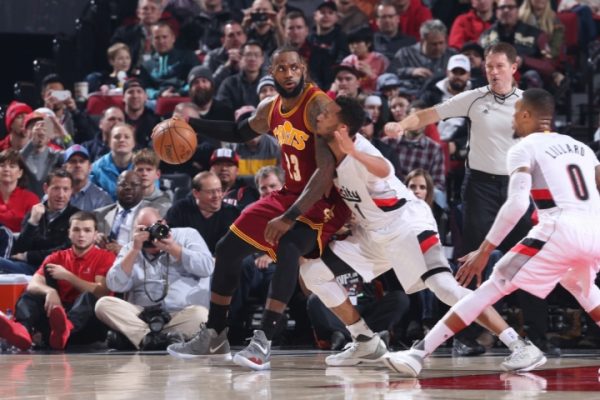 (Portland, OR) – For only the second time in their 2016-17 season, the Cleveland Cavaliers (28-10) find themselves in the midst of a losing streak after they were routed 102-86 by the Portland Trail Blazers (18-23) on Wednesday night at Moda Center.

As a team, the Cavs shot a dismal 34.1 percent from the field, which was their worst shooting performance since their 2015 Christmas Day loss to the Golden State Warriors (31.6 percent overall shooting).

Cleveland did not have much of an answer for Portland rising star shooting guard C.J. McCollum, who had a game-high 27 points on 11-of-20 shooting from the field. In addition, reserve shooting guard Allen Crabbe had 24 points on an eye-opening 9-of-11 shots made from the floor.

“That was a good one. It showed a lot of character in our team,” said Blazers head coach Terry Stotts, who captured his 200th career victory as Portland’s head coach on Wednesday night.

The Blazers were able to keep themselves distanced from the Cavs for most of the second half, as Cleveland faced a double-digit deficit for almost all of the third and fourth quarter.

The Cavs really struggled shooting from behind the arc on Wednesday night, going just 9-of-30 combined as a team. Down low in the post, the Blazers manhandled the Cavs by outscoring them 46-24 in the paint.

Superstar small forward LeBron James, who was only one of three Cleveland players to score in double figures on the night, led the Cavs with a team-high 20 points (5-of-12 from the floor and 8-of-9 from the charity stripe) to go along with 11 rebounds and four assists.

Cleveland power forward Kevin Love had 17 points and 8 rebounds, while All-Star point guard Kyrie Irving had only 11 points on 4-of-16 shots made from the field.

“Right now, we’re not shooting the ball well,” said Cavs head coach Tyronn Lue. “We just have to keep playing and eventually those shots will fall. But defensively we’ve got to be better.”

Up next, the Cavs will look to put together a strong performance on Friday night when they travel to take on the Sacramento Kings (16-22) at Golden 1 Center. The contest, which is scheduled to tip off shortly after 10:30 p.m. ET, will be broadcast live locally on Fox Sports Ohio.