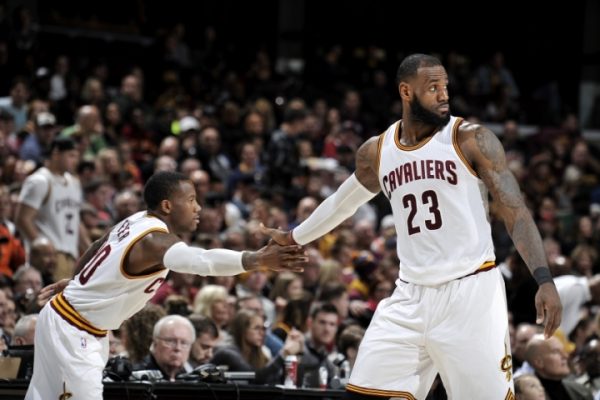 (Cleveland, OH) – Despite the absence of star point guard Kyrie Irving for the second-straight game, the Cleveland Cavaliers (22-7) improved to an impressive 18-2 record at home following Monday night’s 90-82 win over the New Orleans Pelicans (14-22) at Quicken Loans Arena.

With Irving having to deal with a lingering right hamstring, superstar small forward LeBron James led the shorthanded Cavs to victory with a game-high 26 points, seven rebounds, six assists and two steals.

The Pelicans put together a gritty effort as rookie shooting guard Buddy Hield (20 points on 6-of-13 shots from the field, including 4-of-6 from beyond the arc) hit two clutch free throws to cut the Cavs’ lead to just two at 84-82 with just under three minutes left. However, that was as close as New Orleans would get the rest of the way.

During a back-and-forth contest featuring 15 lead changes, the difference for the Cavs came from their reserves as Cleveland’s bench outscored New Orleans’ by a 44-19 margin.

“My confidence keeps rising,” Felder said. “The more minutes I play, the more patience I play with. At my pace, I like to go fast. We like to run, so playing at that pace really helps me a lot.”

Power forward Kevin Love, who had 10 points and nine boards at halftime, compiled yet another double-double effort with 12 points, 11 boards and three assists in just 24 minutes of action. On the one down note of the night, Love had to exit the game early due to what is expected to be food poisoning.

“We just grind it out,” Frye said after the game. “To be honest, guys came in. Kevin’s sick, Kyrie’s hurt, Birdman’s (Chris Andersen) hurt, everyone’s hurt or someone’s sick. Yeah, I’ve got a cold, but guys are just grinding it out.”

Up next, the Cavs will host the rival Chicago Bulls (16-18) on Wednesday night at Quicken Loans Arena. The contest, which is scheduled to tip off shortly after 8 p.m. ET, will be broadcast nationally on ESPN.