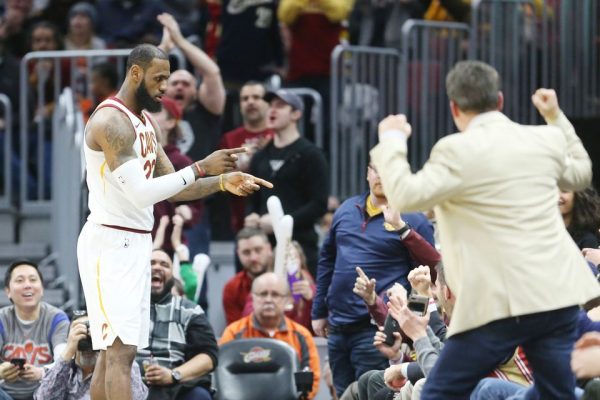 (Cleveland, OH) — Despite shooting just 35 percent from the field, the Cleveland Cavaliers came away with a dramatic 91-89 win over the Miami Heat at Quicken Loans Arena on Wednesday night. The game went down to the final buzzer, with solid defense by LeBron James preventing the game from going into overtime.

The last two minutes of the game were drama-packed, with the game deadlocked at 85 with 1:45 to go. Jae Crowder gave the Cavaliers an 88-85 lead on a 3-pointer with 1:21 left, with the Heat then cutting the margin to a single point with exactly one minute remaining.

“James Johnson’s a load when he has a lot of speed,” James said. “I just wanted to keep the ball between me and the basket and I was able to do that.”

That 35 percent shooting from the field by the Cavaliers was actually boosted by 50 percent shooting during the first quarter. From then on, they hit at just a 30 percent rate, including just 6-of-26 (23 percent) from long-range on the evening.

“We didn’t shoot the ball great, but I thought we just did a good job grinding it out,” Cavs head coach Tyronn Lue said after the game. “I thought defensively, we were good. We brought physicality to the game, was good with our blitzes, and I thought our defense was what won the game for us, despite all we’ve been going through lately.”

Miami was even worse from deep, hitting on just 3-of-28 (11 percent), while both teams delivered sloppy play throughout that resulted in a combined 35 turnovers.

“We played some defense tonight. It wasn’t a pretty game, for sure,” Korver said. “Probably good for us to win a game like this, to rely on defense.”

“We just have to build on this, be more aggressive, cut down on our lack of energy,” Frye said. “If we can get rid of the lulls, we’ll be good.”

The Cavaliers will remain at home for their next contest, which will take place before a national television audience on Saturday night. Their opponent will be the formidable Houston Rockets, with tipoff set for shortly after 8:30 p.m.

“We needed a win like this, when we win a game with our defense,” James said. “Haven’t had a game like that all year that I can remember.”