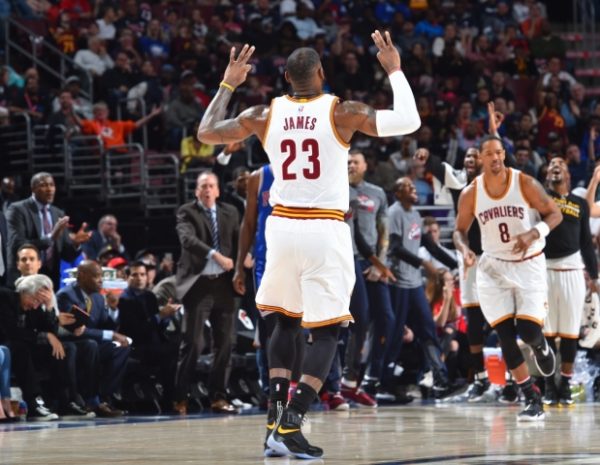 (Philadelphia, PA) – J.R. Smith’s clutch defensive play in the closing seconds of the game helped the Cleveland Cavaliers avoid a major upset and stay undefeated at 6-0 as they eked out a 102-101 victory over a competitive Philadelphia 76ers squad at Wells Fargo Center on Saturday night.

Smith missed a three-pointer with 15.7 seconds left that would have likely iced the game, but he was able to contribute on the other end by forcing Philadelphia guard Gerald Henderson into a turnover.

Entering the final quarter, the Cavs had watched what was once an 18-point lead dip to two points, then witnessed it completely disappear when Philadelphia took a lead. The Sixers would expand the margin to as many as five on multiple occasions, the last time coming at 98-93 with 3:54 remaining. 3-pointers by LeBron James and Smith then briefly gave Cleveland the lead back with 2:50 to go.

Yet the Sixers battled back to go up by two at 101-99 and had a chance to double that lead. However, a charging call with 1:20 left negated a basket and Channing Frye then nailed a 3-pointer with 1:05 left that ultimately served as the game-winner.

Frye explained that the team’s consistency issues in the early going are a work in progress.

“We’re still trying to figure out the best lineups, but overall we have to be more crisp,” Frye said, “Right now, we just make things too complicated.”

Both James and Kevin Love ended the night with double-doubles, with James leading all scorers with 25 points and 14 assists, while adding eight rebounds. Meanwhile, Love chipped in with 20 points and 11 boards.

Frye and Smith contributed 12 and 11 points, respectively, while Tristan Thompson again reached double figures with 13 rebounds. On the flip side, Kyrie Irving endured a rough shooting night, hitting just 3-of-17 from the field for eight points. One reason for Irving’s poor shooting was attributed to his late arrival to the arena after the second team bus was blocked by the motorcade of Vice President Joe Biden, thereby affecting his pre-game routine.

Since Cleveland got the win, James wasn’t upset with the performance, but noted the need for improvement.

“We put ourselves in that position, but we got the right stop at the right time,” James said. “Good teams find a way to win, but we have to continue to get better.”

Cavs head coach Tyronn Lue was also content to get the victory.

In the first quarter, the struggling Sixers were matching the Cavaliers, holding a 19-18 advantage with three minutes left in the period. At that point, Richard Jefferson sparked a Cleveland run of 15 unanswered points to end the quarter with a floating jumper. The key point in this barrage was a trio of 3-pointers in a span of just 45 seconds.

The Cavs expanded their lead to 18 at 41-23 and appeared to be on their way to a comfortable win. That idea abruptly changed when Philadelphia went on a 21-6 run to get to within three at 47-44. However, a miss then ignited 10 more unanswered points by Cleveland, who eventually took a 57-46 lead into intermission.

As expected, James entered the NBA’s top 10 in scoring early in the game by moving into the 10th spot above Hakeem Olajuwon, who had tallied 26,946 points during his Hall of Fame career. James needed just 993 games to reach that point total, compared to Olajuwon’s 1,238 games. Elvin Hayes is now in James’ sights with 27,313 points.

James reflected on the milestone after the game:

“I don’t really cater my game around scoring. I like to facilitate, get my guys involved, have my guys on the glass,” James said. “I’m just blessed. I’ve done a great job of keeping my body in form every year, and I’ve been available for my teammates, for the most part, throughout my career.”

Next up for the Cavaliers will be a home clash against the Atlanta Hawks on Tuesday night, followed by a Friday night matchup in Washington. In between, the Cavs will visit the White House on Thursday to be recognized for winning their first-ever NBA title.