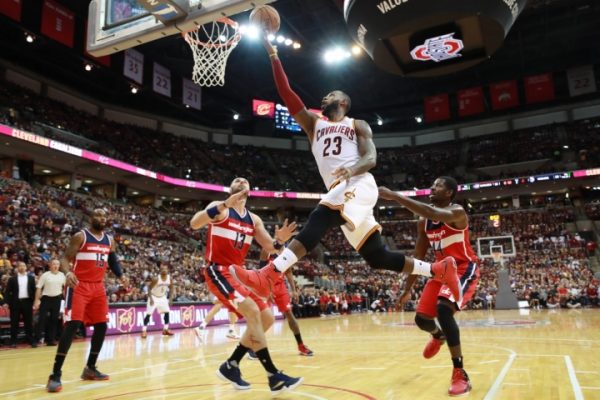 (Columbus, OH) – In their final tuneup of the preseason, the Cleveland Cavaliers’ late comeback came up short in a 96-91 loss to the Washington Wizards Tuesday night at Schottenstein Center.

The Cavaliers trailed 92-86 with 1:31 to play, a deficit that John Holland cut in half with a three-pointer at the 1:17 mark. Then, Markel Brown’s basket with 47 seconds to go chopped the margin to a single point.

However, after getting a rebound on a Washington miss, DeAndre Liggins’ three-point attempt missed and the Wizards converted two free throws with 19 seconds remaining. Trying to tie the game with 12 seconds left, Jonathan Holmes‘ shot was partially blocked and Washington added two more points from the charity stripe to close things out.

One of the main culprits in the loss was the healthy drop in Cleveland’s shooting percentage after connecting on 59 percent of their shots in the opening quarter. For the remainder of the game, they hit just 38 percent from the field.

The trio of LeBron James, Kevin Love and Tristan Thompson combined for 47 points, though James was the leader in minutes played among this group with 26 on the night. Thompson managed to collect a double-double in 23 minutes by hauling down 10 boards to go with his 14 points, while all of Love’s 15 points came in the opening quarter.

J.R. Smith made his first appearance of the year, hitting for four points in 12 minutes, including a three-pointer. One protective measure was taken by the Cavs during that first half when they removed Kyrie Irving from the game. The point guard, who’s had his fair share of injuries with the Cavs, felt some left calf tightness and abruptly ended his night.

Cleveland head coach Tyronn Lue indicated before the game that the plan was to give Smith a taste of action and get him more prepared during practice over the next week.

“We’re gonna scrimmage a little more and play a lot more, and hopefully he can get his conditioning through practice,” Lue said.

The next time the Cavaliers take the court for a game, it will actually mean something as they open the 2016-17 season next Tuesday night. Prior to the start of that nationally televised broadcast, the Cavs and its staff will accept their championship rings and a banner will be unfurled to mark that history-making achievement.

Asked about the one-week layoff, Lue didn’t seem too concerned about losing any edge.

“After the outcome of game one, I’ll let you know,” Lue said. “In the playoffs we did a good job with seven days off, especially having an older team.”