Iconic LeBron James Banner to Stay up in Downtown Cleveland 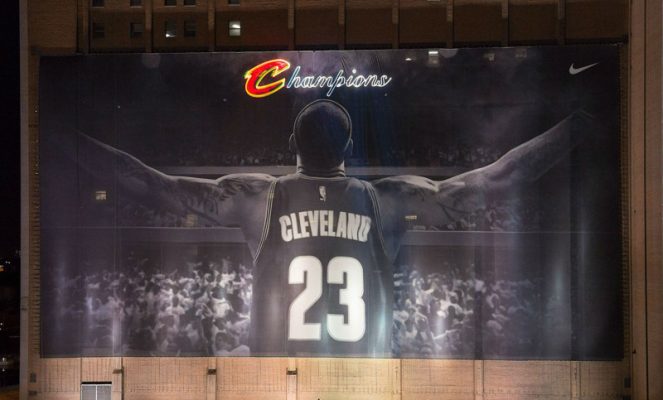 Avoiding a public relations debacle that quickly saw 25,000 people sign a petition asking that the huge LeBron James Nike banner across from Quicken Loans Arena not be removed, Sherwin-Williams announced early Tuesday that the banner would stay in place.

The original plan by the company, on whose building the sign is located, was to remove it for 90 days in order to put a patriotic sign up for visitors attending the Republican National Convention. That event will take place from July 18-21 at Quicken Loans Arena.

While the announcement by the company to remove the James banner was made in early May, the Change.org petition didn’t come about until the Cleveland Cavaliers won the NBA title on June 19. The rapid speed in gaining signatures changed the mind of Sherwin-Williams CEO John G. Morikis, who issued the following statement:

“For 150 years, Sherwin-Williams has been proud to call Cleveland our home, and we’re committed to doing the right thing for the people of this great city. For the last year, we’ve been planning to hang a celebratory banner outside our building during the summer months.

“But what better way to celebrate our 150th year than with an NBA championship. As a long-time supporter of the Cavs, and the entire community, we want the energy and excitement in this city to continue.”

Sherwin-Williams was one of the sponsors of the mammoth parade on June 22 that celebrated the Cavaliers’ title, which drew an estimated 1.3 million people to downtown Cleveland. In addition to the banner decision, the company will also be donating $150,000 to the LeBron James Family Foundation.