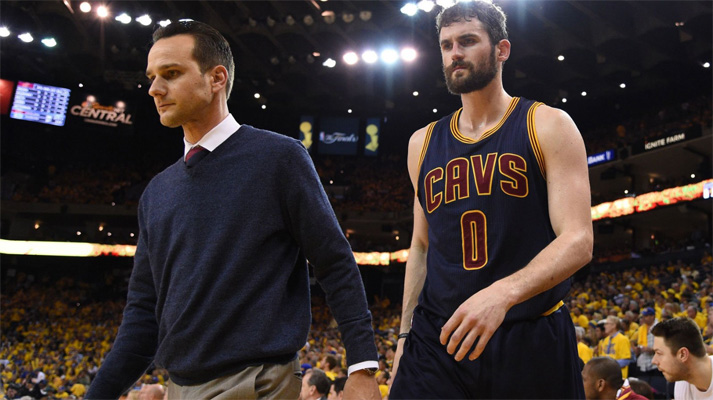 Shortly after the conclusion of the Cleveland Cavaliers’ 110-77 loss to the Golden State Warriors in Game 2 of the NBA Finals on Sunday night, Cavs forward Kevin Love was officially diagnosed with a concussion.

Word of the diagnosis came from both Brian Windhorst of ESPN and Kristen Ledlow of NBA TV.

Kevin Love has been diagnosed with a concussion and has entered the NBA protocol.

Love was struck in the back of the head by the Warriors’ Harrison Barnes late in the first half of Game 2. He fell to the floor, but remained in the game. He showed no concussion symptoms at halftime, according to Cleveland head coach Tyronn Lue, but when he appeared woozy during an early third quarter timeout, he was removed from the game.

Taken to the team’s locker room at Oracle Arena, Love underwent tests under the NBA’s concussion protocol. The league’s official policy states that a player who has suffered this injury can’t return to play that day or the day after, with Game 3 not set until Wednesday night.

Love will be closely monitored over the next 24 hours and he won’t be able to take part in any activities during that time. If the team doctor rules that he no longer has a sign of the concussion, the return-to-participation protocol will begin. The three steps in that are:

Once that’s been completed, the Cavaliers’ team doctor will consult with the Director of the NBA Concussion Program Dr. Jeffrey Kutcher. If the team doctor feels Love is able to play, he’ll be back in uniform for Cleveland.