LeBron James Addresses Fatigue and Heavy Workload Heading Into Round 2 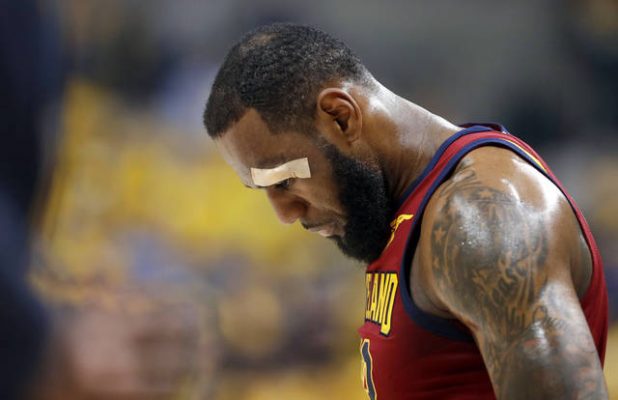 The Cleveland Cavaliers managed to advance to the Eastern Conference semifinals, but not without LeBron James practically dragging them past the Indiana Pacers.

Now, with Game 1 against the Toronto Raptors just hours away, James has addressed how his heavy workload from round one might impact him going forward.

Later, a reporter offered the idea that the minutes he played against the Pacers was an “issue,” but James was quick to refute that notion.

If James was feeling the fatigue during the seven-game series against the Pacers, he wasn’t showing it. James averaged a phenomenal 34.4 points, 10.0 rebounds, and 7.7 assists per game. Still, James isn’t looking to relive his first-round heroics.

“It’s about what we did,” James said. “Just trying to help us advance. I had a lot of things that I had to do to try to help our team win, and I was satisfied with the fact that I was able to go out and make plays to help our team succeed and move onto the next round, and that’s the most important thing.”

The three-time NBA champ wasn’t the only one fielding questions about his workload. Cavs head coach Tyronn Lue let reporters know that while James will certainly continue to play big minutes, the Cavs are committed to not letting it get out of hand.

“Just got to be smart about the situation,” Lue said. “I know he wants to play and play a lot, but we’ve got to be smart because we play every other day, so there’s not a lot of time really to recover.”

As the Cavs advance deeper into the playoffs, it will be fascinating to see how James manages to continue to excel on the court as his minutes pile up. Hopefully some of his teammates are able to help bear the load in the series against the Raptors. If not, expect to see James on the court for the vast majority of the series yet again.