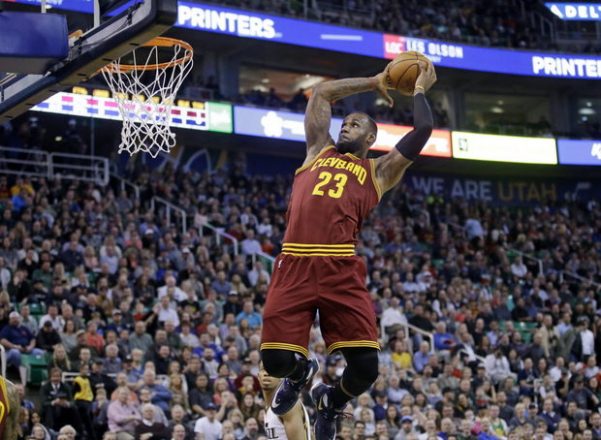 The all-around excellence of the Cleveland Cavaliers’ LeBron James has always been evident during the regular season, with his postseason statistical numbers now reaching a point where he’s close to becoming the only player in NBA history to be in the top 10 in points, assists and rebounds.

When it comes to points, James is already in sixth place with 5,111, 25 behind the still-active Tim Duncan of San Antonio. Both players are expected to relegate former Cavalier Shaquille O’Neal to the sixth spot by the conclusion of this postseason.

In the area of assists, James also finds himself already in the top 10 in fourth place, with 1,215 during his 11 playoff seasons. He’s currently just 49 away from passing Jason Kidd, though he may not be able to go any higher. That’s because John Stockton is in the second spot with 1,839, and Magic Johnson at the top with an eye-opening 2,346.

The physical play that comes in the paint hasn’t prevented James from making his mark in the rebounding department as well. Entering the Eastern Conference semifinals, he’s just 90 boards away from passing Larry Bird, having grabbed 1,594 during his legendary career.

While not among the numbers on this list, James’ passion for winning should also deliver a statistic that he’s likely most proud of, especially considering who he’ll be passing. That category is in playoff victories, with James currently at 119 for his career. That’s one behind an idol of James’, the iconic Michael Jordan, whose teams also lost three first-round series as opposed to James’ spotless record in that department.

James will have the opportunity to improve on all his numbers when the Cavs resume play next Monday night at Quicken Loans Arena against either the Atlanta Hawks or Boston Celtics.

@kingjames is on the verge of doing something no other player has done in NBA history, including MJ