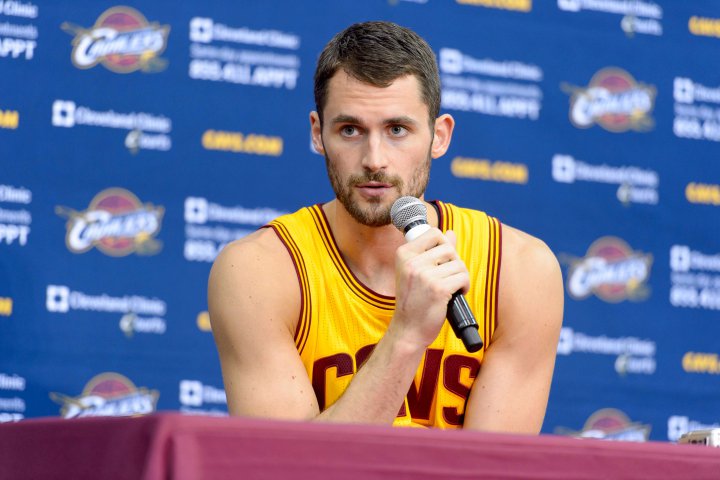 During an interview on ESPN Radio’s Mike and Mike show on Wednesday morning, Cleveland Cavaliers forward Kevin Love took the time to publicly discount rumors that he was planning on leaving this year in order to join the Los Angeles Lakers.

“People are always going to talk,” said Love, who added, “Since I was traded to Cleveland this summer, I’ve said since day one that I’m a Cleveland Cavalier long term and I plan for it to be that way. If I could could end all that speculation now, I would. But people are going to continue to talk no matter what.”

Love has a player option for next season to play for $16.7 million, but is expected to opt out and sign a long-term deal with the Cavaliers. That new deal is expected to be for five years and over $120 million.

With a new league-wide broadcasting deal set to begin in a few years, the salary cap for Cleveland and other teams will be increased, allowing players to sign for more money. The strategy mirrors what Love’s teammate LeBron James will be doing.

The questions about Love’s future picked up speed back on November 10 when Sam Smith, a writer for the Chicago Bulls, hinted that Love would leave after the season to play for the Lakers.

Earlier today, Adrian Wojnarowski of Yahoo! Sports indicated that Kobe Bryant plans on trying to recruit Love to play for the Lakers next year. Presently, Bryant’s team is 5-13, a far cry from the glory years that included five titles with Bryant in the backcourt.

Love, who grew up on the West Coast, played college basketball at UCLA and reportedly has a Los Angeles-based girlfriend.

In the Cavaliers’ first 16 contests this year, Love has averaged 17.9 points and 9.5 rebounds, collecting four double-doubles. However, in his past three games, Love’s scoring output has increased to 25.3 points per contest.

Although there is no official way for Love to prove he will be staying, his comments would seemingly put the issue to rest. Otherwise, Love runs the risk of being as publicly reviled as James was four years ago when he left Cleveland for the Miami Heat.