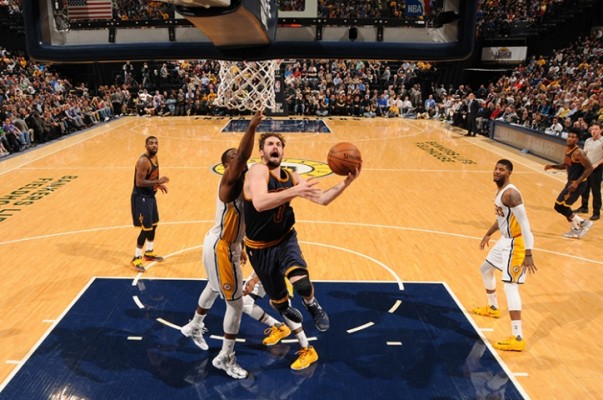 (Indianapolis, IN) – Struggles with the three-point shot for half the game, coupled with defensive struggles and the absence of LeBron James were key factors as the Cleveland Cavaliers saw their four-game winning streak come to an end with a 123-109 loss to the Indiana Pacers at Bankers Life Fieldhouse on Wednesday night.

Just one night after drilling 18 three-pointers, the Cavs went cold from long-range in the second and third quarters after hitting 2-of-4 in the opening period. During those two quarters, they made just 2-of-17 in that category before warming up slightly to finish 8-for-29 on the night.

In addition to those woes, choosing to give James the night off was the result of playing the latter part of a back-to-back. That removed the 25 points per game that he’s averaged from the team’s lineup, which his teammates were unable to make up. The team’s record without James now stands at 1-3 on the year.

“I thought offensively, we moved the ball well, but defensively, we didn’t take the challenge tonight,” said Cavaliers head coach Tyronn Lue after the game.

Kyrie Irving and Kevin Love paced the Cleveland scoring, with Irving hitting for 26 and Love for 23. In addition, Irving handed out six assists and Love grabbed five rebounds.

Lue explained why Love was limited to just over 18 minutes on the night:

“His back locked up on him in the third quarter,” Lue said, though he wasn’t concerned about a lingering issue. “This has happened before and he’s come back.”

Love did come back in the fourth quarter and also said there was no injury issue:

“I feel good. I put some heat on it and came back after a few minutes,” Love commented. “It (the back problem) came during an awkward rebound.”

Three other players scored in double-figures for the Cavs. J.R. Smith finished with 10 points and missed his one three-point attempt after hitting seven threes just one night earlier. Meanwhile, veterans Richard Jefferson and Channing Frye matched those 10 points in reserve roles.

“We just have to do a better job of contesting shots,” Irving said after the game. “We want to come out and be aggressive and have a better defensive mindset.”

Both teams put up torrid shooting numbers in the first quarter, each shooting better than 60 percent from the field. Even though the Pacers ended the quarter with a 36-33 advantage, the Cavaliers actually had a better shooting percentage, connecting on 69 percent of their 16 attempts.

The second quarter saw Indiana stay hot while the Cavs cooled off. That contrast allowed the Pacers to run off 14 unanswered points to take a 55-41 lead. Cleveland was never able to get closer than six and headed to intermission trailing by a 70-61 score.

“The first half felt like a Western Conference game,” Love said. “It was one of those nights where it seemed like everything was falling for them.”

In the second half, the Cavaliers were never able to get closer than seven points at 77-70. At that point, Indiana then went on a 19-8 run to give them a 96-78 lead with 2:31 left in the period. Double-digit leads for the Pacers marked the rest of the contest as they finished shooting 56 percent from the field.

“We still have momentum, but defensively, we took a step back tonight,” Lue said. “The whole night, we were playing catch up.”

The Cavaliers will play their final regular season road game on Saturday night when they face the Chicago Bulls. The game will tip off shortly after 8:30 p.m. ET, a special time due to national TV coverage on ABC.