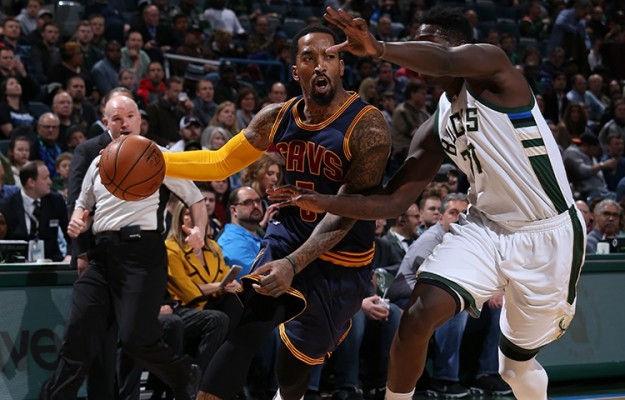 (Milwaukee, WI) — Thanks to 66-percent shooting from the field during the first half, the Cleveland Cavaliers had little trouble in collecting their 56th win of the season with a 109-80 victory over the Milwaukee Bucks at the Bradley Center on Tuesday night.

The two main weapons in the first two quarters were J.R. Smith and Kevin Love, who combined for 36 points. Smith was razor-sharp from long-range connecting on 7-of-11 to account for all of his 21 points, with his three-pointer just 48 seconds into the contest getting the Cavs started.

The three-pointer was consistent enough (50 percent) that that the Cavaliers matched their season-high of 18 in a game. Smith also established a new team single-season record for three-pointers.

Smith didn’t score in the second half to finish with those 21 points, while Love narrowly missed a double-double with 17 points (15 in the first quarter) and nine rebounds. Also coming close in the double-double department was LeBron James, who tallied 17 and contributed nine assists.

“When you get J.R. going like that, it’s easy to move the ball to him,” point guard Kyrie Irving commented after the game.

Irving showed no ill-effects from his sprained ankle and finished with 15 points and six assists. Tristan Thompson and Channing Frye rounded out the double-figure brigade with 11 and 10 points, respectively. Thompson added seven boards while Frye brought down six on the night.

“We had the right approach coming into the game,” Cleveland head coach Tyronn Lue said. “I thought we shot the ball well. This was one of our most complete games, both on offense and defense.”

The game was never in doubt after the first half, with the Cavs leading from start to finish. The large lead they held for most of the game allowed all Cavaliers starters to rest for the entire fourth quarter, which may turn out to be important with a game on Wednesday night.

“It’s my type of basketball when the ball is moving,” James remarked after the game. “I couldn’t care less how many shots I get.”

Cleveland used a 19-8 run in the final 5:34 of the first period to hold a 33-19 advantage. They then kicked it into high gear, boosting the lead to 20 by the midway point of the second quarter. Following a Timofey Mozgov dunk, the Cavs held their biggest lead of the half at 65-38 before heading to intermission with a 67-43 advantage.

“We don’t want to have let-ups these last few games, and we feel like we’re making progress,” Love said.

The Cavaliers were in such a groove that they avoided one of their lingering problems of having a third-quarter letdown, actually increasing their lead to 26 to take a 93-67 lead into the final quarter. The offense did cool down somewhat, though the continued strong ball movement resulted in the Cavs collecting seven assists on their nine field goals.

“I thought the ball continued to move, so we didn’t get bogged down,” Lue said about the success in the third quarter. “Consistency. That’s the biggest thing we need to establish.”

For the game, Cleveland finished with 30 assists on their 41 field goals for the night and closed out the game shooting 55 percent from the field.

“That game was a bold statement, just in terms of the way we played with our pace,” Irving said. “Just coming out in the third quarter, getting Kevin going early as well as guys being aggressive on pick-and-rolls and in transition.”

The Cavaliers return to the court on Wednesday night when they travel to Indianapolis to face the Pacers in a game set to tip off just after 7 p.m. ET. In recent years, winning there has been difficult, with the Cavs snapping an 11-game losing streak there earlier this year, which required overtime to pull off.