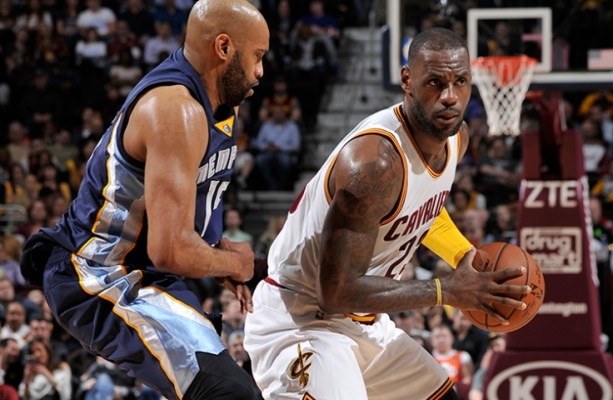 (Cleveland, OH) – Despite a furious comeback in the final six minutes, the Cleveland Cavaliers came up short in the final minute and suffered an embarrassing 106-103 loss to the Memphis Grizzlies at Quicken Loans on Monday night.

The Grizzlies dressed just nine players and had no starters in the lineup, yet held the lead for most of the game, primarily due to the sluggish and sloppy play of the Cavaliers. In the latter category, Cleveland committed 25 turnovers, 17 of them coming in the middle two quarters, and 16 coming on steals by their opponents.

Cavs head coach Tyronn Lue was asked how the sloppy play looked from the bench:

“It looked really bad, we didn’t have a good feel for the ball.”

Kyrie Irving spoke about the lethal effect the turnovers had on trying to win the game:

“We tried to execute down the stretch, but a lot of our mistakes caused us to lose tonight.”

Cleveland trailed by 10 at 95-85 with 6:19 left, but took the lead with 2:43 to go, thanks to a 13-2 run. The two teams then traded leads, with LeBron James’ spinning layup with 45.8 seconds, which allowed the Cavaliers to go ahead for the final time at 100-99. Mario Chalmers then connected on a jumper with 25.4 remaining to take the lead back, and James was then forced into a jump-ball situation, which Memphis won.

From there, the Grizzlies connected on five free throws in the final 14.6 seconds, while Irving’s three-point attempt at the top of the key missed at the buzzer to drop the Cavaliers to 44-18 on the year.

Lue was asked afterwards to explain the 54 points that Memphis scored in the paint:

“I thought our guards allowed too much penetration.”

Concurring on the problem in the paint, James used NFL slang to describe the problem:

“We gave up a lot of pick sixes,” James said. “In NFL terms, that’s taking it to the house.”

James and Irving combined for 55 points, with James contributing 28 points, nine rebounds and five assists. Irving chipped in with 27 points, five assists and four steals. The only other Cavs to score in double figures were Kevin Love, who had a quiet double-double with 14 points and 11 rebounds and Tristan Thompson with 11 points and six boards.

Asked about how Cleveland was able to overlook a team that was ailing this badly:

“We didn’t respect them, we didn’t pay attention to detail,” James said. “We were very careless with our mindset”

From the outset, Memphis was the more aggressive squad, connecting on 62 percent of their first quarter field-goal attempts. That allowed them to hold a 33-25 advantage following the first 12 minutes.

The Cavaliers looked to be taking control at the start of the second quarter, thanks to a 13-5 run, but seven of their nine turnovers in the period marked their play for the rest of the half. In addition, their defense that had allowed the Grizzlies to make just two of their first 11 shots in the quarter slacked off considerably. Memphis scored on eight of their next 12 shot attempts and headed to intermission with a 58-49 lead.

With four minutes left in the third quarter, the Grizzlies took their largest lead of the game at 79-65, though Cleveland was able to whittle it down to eight at 82-74 by the time the period had ended. The Cavs were then able to get the margin down to four at 84-80 early in the fourth with 10:23 left, but Memphis answered again, taking that 10-point lead that set up the ill-fated comeback.

Irving spoke about how the team’s mindset needs to improve:

“We just have to come out and play everyone the same way,” Irving said. “No excuses, they came in and beat us.”

Lue gave credit to the Grizzlies for their grittiness:

“I thought they were tougher than us, they outscrapped us,” Lue said. “You have to respect everyone who plays in this league. They competed and they played hard.”

The Cavaliers now begin a four-game Western road trip beginning on Wednesday night in Sacramento. That contest with the Kings will tip off shortly after 10 p.m. ET.