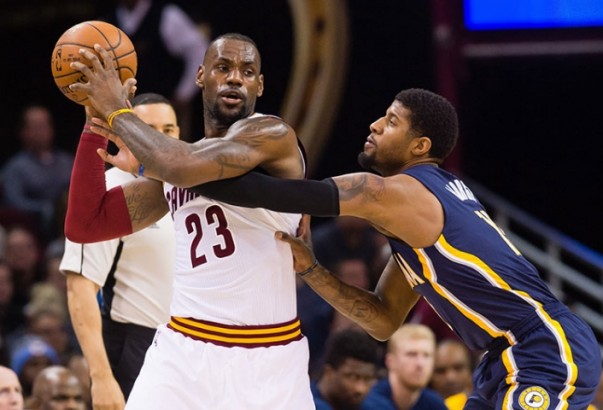 (Cleveland, OH) – A pair of clutch plays by Tristan Thompson in the final minute helped the Cleveland Cavaliers snap a two-game losing streak as they emerged with a 100-96 victory over the Indiana Pacers at Quicken Loans Arena on Monday night.

With the score tied at 94, Thompson scored on a short jumper with 39.5 seconds left. Then, with 17.9 seconds remaining, he blocked a Rodney Stuckey shot, allowing LeBron James to get the rebound. In between four subsequent free throws by Kyrie Irving in the final 8.9 seconds, the Pacers notched a basket, but the Cavaliers came away with their 42nd win of the season.

James spoke after the game about the team’s pace:

“For us, it’s more about our energy and effort, and we have to give a lot of energy.”

Cleveland had trailed 94-91 with 1:30 left, but Matthew Dellavedova’s three-pointer with 1:13 left tied the game for the 17th time. This tightly-contested affair also saw 25 lead changes, with no lead higher than six points the entire night.

Prior to that stretch, the Cavaliers received a delayed bonus after officials checked a three-pointer made by Indiana with 4:46 left. A little more than two minutes later, the basket was disallowed because of a shot clock violation, a huge change which changed the Cleveland deficit from four to one. James then followed with a layup to give the Cavs a 91-90 advantage.

Cleveland head coach Tyronn Lue spoke about the effect that scoring change had on the Cavaliers’ mindset:

“That definitely changed the complexion of the game,” Lue said. “It gave us a lot of life.”

J.R. Smith acknowledged the team’s ability to play well when their backs are against the wall, but didn’t want it to be a regular thing:

“It’s a gift and a curse, that’s not the identification we want,” Smith said. “We want to be more consistent.”

James, who led all scorers with 33 points, provided nearly half of the first half scoring with 21 of the Cavs’ 44 points. He also added five rebounds and four assists. Irving contributed 22 points, six assists and three rebounds.

Lue spoke about James’ performance, after sitting out Sunday’s loss at Washington:

“I thought he had a lot of pop tonight,” Lue said. “Especially early, pushing the ball in transition, I thought attacking the basket, he had a hop with him tonight.”

James spoke about his teammates’ attitudes toward him being in the lineup:

“They felt like they missed my energy yesterday,” James said. “That’s what I bring to the table. I play on both ends of the floor and I bring a lot of energy on and off the court.”

Three others finished in double figures, with Thompson collecting a double-double with 14 points and 11 rebounds. Kevin Love added 13 points and eight boards, while Smith chipped in with 11 points.

The Cavaliers will be off until Friday when they host the Washington Wizards in a contest that will be nationally televised on ESPN. That game will tip off shortly after 8 p.m. ET.