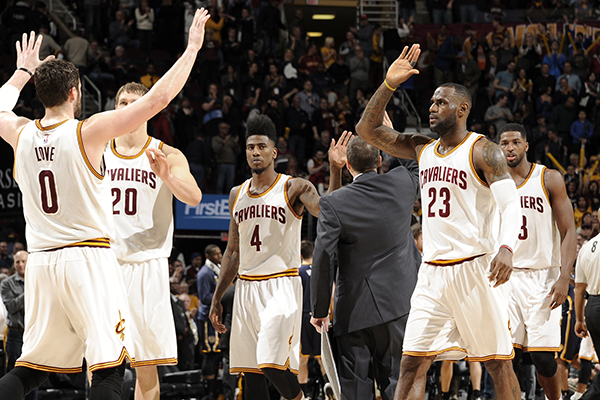 More than half of the general managers responding to NBA.com’s annual survey believe the Cleveland Cavaliers will become the fourth team in less than a decade to capture a championship the year after losing in the NBA Finals.

Seldom does that occur in other professional sports. Not since the Miami Dolphins posted the only undefeated season in NFL history more than 40 years ago has anyone won the Super Bowl after coming up short in the game the year before.

But the 2008-09 Los Angeles Lakers, the 2011-12 Miami Heat and the 2013-14 San Antonio Spurs have proven that bouncing back from the disappointment of not winning it all can be accomplished. This is only a recent trend in the NBA. Before the Lakers, one had to go back 20 years to the Detroit Pistons “Bad Boys” of Isiah Thomas, Joe Dumars, Dennis Rodman and Bill Laimbeer to find the last team to pull off such a feat.

There wasn’t much that the Lakers, Heat and Spurs shared in common during their title runs. An encouraging sign for Cavs fans understandably concerned about the health and availability of LeBron James, Kyrie Irving, and Iman Shumpert going into the regular-season opener Tuesday night is that two of those three teams did not lead the NBA in victories.

Certainly the Cavs would prefer to win more than 53 games, a total which the Golden State Warriors and five other teams were able to top last season. But any shortcomings from now through mid-April would soon be forgiven and forgotten if they bring Cleveland its first sports championship in more than 50 years and duplicate what these teams did:

The year before: The Lakers went 57-25 before eventually losing in six games to the Boston Celtics.

That championship season: They went 65-17 and had the best record in the Western Conference but were pushed to the seven-game limit in the conference semifinals by the Houston Rockets. They defeated the Orlando Magic in five games in the finals, with two of those victories requiring overtime.

Recap: X marked the spot as coach Phil Jackson won his 10th title overall and fourth with the Lakers, who had broken up the combination of Kobe Bryant and Shaquille O’Neal in the summer of 2004. Bryant averaged 26.8 points a game during the regular season and 30.2 points in the playoffs. While the Lakers were only a middle-of-the-pack team defensively based on points allowed, their average of 104.7 points given up per 100 possessions was the sixth-best figure in that category. Pau Gasol averaged 18.6 points and 9.2 rebounds against the Magic in a series where the Lakers got scant contributions from starting center Andrew Bynum but plenty of help off the bench from Lamar Odom.

The LeBron factor:  Two years removed from an unlikely run to the first finals appearance in franchise history, the Cavs won a league-best 66 games and were perceived as a near lock to have a rendezvous with the Lakers. But the anticipated LeBron-Kobe matchup never materialized as the Magic, with Dwight Howard erupting for 40 points in the series-clinching Game 6, upset them in the conference finals. 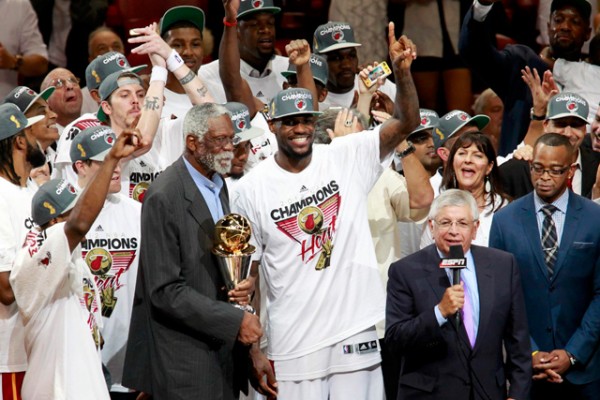 The year before: The Heat went 58-24 and lost in six games to the Dallas Mavericks.

That championship season: They went 46-20 in a season shortened by 16 games because of a lockout. In the Eastern Conference semifinals, they came back from a 3-2 series deficit against the Celtics to win Games 6 and 7 convincingly. After beginning the finals with a loss at Oklahoma City, they rattled off four wins in a row over the Thunder.

Recap: Erik Spoelstra was in his fourth year as coach of the Heat and, much like David Blatt now, faced a torrent of criticism nationally for not leading a team loaded with talent to a championship. This was the second year after James and Chris Bosh joined Dwyane Wade in Miami, and Bosh missed the majority of their playoff run with a lower abdominal strain. James and Wade combined to average more than 51 points a game against the Thunder, but that figure was less than what Kevin Durant and Russell Westbrook averaged. The difference ended up being in the three-point shooting the Heat got from Mike Miller, Mario Chalmers and especially Shane Battier.

The LeBron factor: Determined to make up for his series against the Mavericks in which he attempted only 20 free throws in six games and deferred more to his teammates, James lived up to the expectations heaped upon him following his controversial departure from the Cavs in 2010. He averaged 28.6 points, 10.2 rebounds and 7.4 assists in a series the Heat would have never reached had he not gone off for 45 points at Boston in a win-or-go-home Game 6. 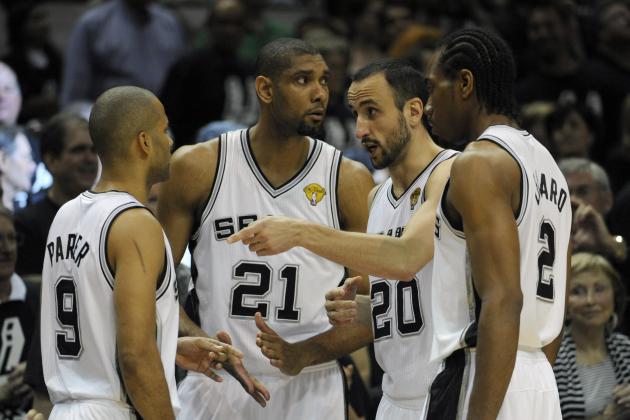 The year before: The Spurs went 58-24 and lost in seven games to the Heat.

That championship season: Their 62-20 record was the best in the league. They were pushed to the seven-game limit in the first round by the Mavericks and needed overtime in Game 6 at Oklahoma City to win in a conference finals where the home team had dominated the first five games. A five-game triumph over the Heat in the finals included back-to-back wins at Miami by a combined 40 points.

Recap: If the Cavs thought they felt devastated last June, that was nothing compared to what the Spurs went through after Ray Allen’s three-pointer in Game 6 at Miami all but snatched the Larry O’Brien Trophy from their hands. Both Tim Duncan and Manu Ginobili were over 35 and had apparently seen their last chance at a fifth championship disappear. Instead, the Spurs came back better than ever, finishing second in field-goal percentage and third in defensive rating with an average of 102.4 points allowed per 100 possessions. They shot 52.8 percent overall against the Heat and averaged 25.4 assists a game in a textbook display of team basketball.

The LeBron factor: His swan song with the Heat might be best remembered, fairly or not, for the repeated leg cramps he suffered in Game 1 at San Antonio after the air conditioning in the arena went out. But his 35 points in Game 2 was the primary reason for a 98-96 victory, which gave them a glimpse of hope before the Spurs began to carve them up inside and out.