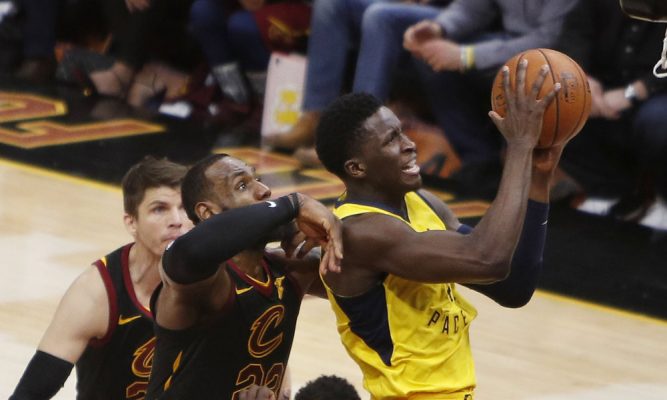 The final minute of the Cleveland Cavaliers‘ dramatic Game 5 victory over the Indiana Pacers had plenty of twists and turns, with each team having the opportunity to win the game. In that period of time, two controversial calls were made by the game’s officials, with each team being the beneficiary.

The NBA's last-two-minutes report is out, and it says, indeed, that last night the Cavs should have retained the ball with 27.6 seconds to go (refs mistook who last touched it before it went out). And, indeed, LeBron's block on Oladipo with 5 seconds to go was actually a goaltend pic.twitter.com/cAoGFqNIAJ

The Last Two Minute Report, in short, looks at key plays in close games in the final two minutes of action. With 27.6 seconds remaining, LeBron James was called for deflecting the ball out of bounds, when in reality, it was the Pacers’ Thaddeus Young that deflected the ball out of bounds first.

Then, with the game tied at 95-apiece, the Pacers’ Victor Oladipo had the opportunity to try and score in the closing seconds. James blocked the shot and called timeout before then hitting the game-winning shot at the buzzer. However, upon further review after the game, it was deemed that Oladpio’s layup hit the backboard before James blocked the shot, which was essentially a goaltend.

The win gave the Cavaliers a 3-2 lead in the tight series and affords them the opportunity to clinch the series in Indianapolis on Friday night. If they fail to do so, Game 7 is set for Sunday night at Quicken Loans Arena.