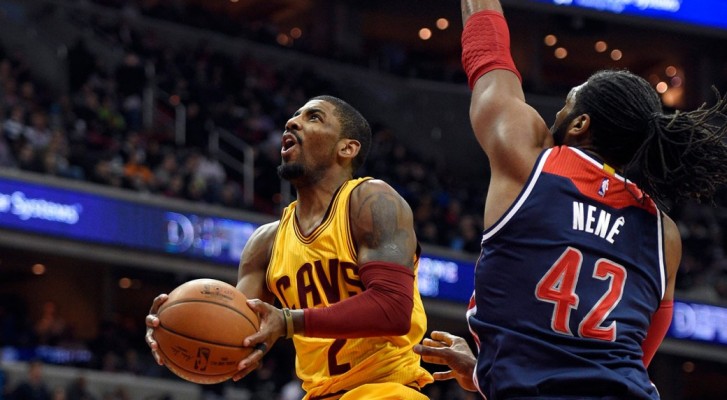 (Washington, DC) – Despite a promising start, the Cleveland Cavaliers were unable to overcome the absence of LeBron James from the lineup and dropped their second consecutive game in a 113-99 loss to the Washington Wizards on Sunday afternoon at Verizon Center.

James didn’t play in the contest in an attempt to spare him from the grind of back-to-back contests, with the Wizards’ game followed on Monday night by a home matchup against the Indiana Pacers. This game wasn’t as close as the final score had indicated, with the Cavs scoring the final 15 points of the contest.

“It hurts us offensively and defensively,” Lue said. “Because you want to run plays where he’s the main focus and you can’t.”

Kyrie Irving led all scorers with 28 points and six assists, with Kevin Love contributing 12 points and five rebounds. Three others Cleveland players also scored in double figures, with one of them, Timofey Mozgov, collecting a double-double with 10 points and 10 rebounds.

Irving was asked about James’ absence in the lineup:

“Our top leader isn’t playing, it’s another chance for guys to step in and relish that opportunity,” Irving said. “But our intensity level just wasn’t there.”

“I thought we were focused going into the game,” Love said. “We just didn’t bring it.”

The game itself began with the Cavaliers hitting five of their first eight shots within the first four minutes to take a 13-6 lead. However, it was all downhill from there as Washington went on a 29-15 run for the remainder of the period, hitting 60 percent of their shot attempts during the quarter. The surge began in part due to the Cavs missing nine of their next 10 shots after taking that seven-point lead.

The Wizards would lead by as many as 13 during the second quarter, with the Cavs able to slice the deficit to five at 59-54. That came with just under a minute left in the half on a three-pointer from Matthew Dellavedova.

However, Washington scored the final two baskets before intermission, followed by the first nine points of the second half. That made it 72-54 and effectively ended the game, with Washington leading by 26 entering the final quarter. In the fourth, the margin reached as high as 29 on two occasions.

Despite the loss, Lue was upbeat about the team’s prospects down the stretch:

“I feel good about what we have going on,” Lue said. “We’re in decent shape. Especially on the road, you want to try and control the pace and we didn’t do that today.”

That aforementioned Pacers game is set to tip off just after 7 p.m. ET.